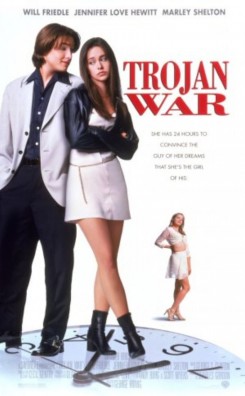 Trojan War is a film about a teenage boy, who is in need of a prophylactic and the numerous obstacles he faces while trying to obtain one.

Brad, the boy needing the prophylactic, is running through a back yard when he encounters a dog. The dog is on a chain attached to a cupid statue in the ground when he starts running after the boy. As Brad attempts to climb over a fence the dog grabs at his foot. The post is pulled free of the ground and the dog starts chasing Brad, pulling the cupid statue behind him. As Brad is driving a golf cart through a golf course, the dog is seen chasing the cart. The statue gets caught on a tree trunk jerking the dog to a stop. This scene was shot in cuts. The statue was made out of Styrofoam. Trainer #1 released the dog where he ran from A to B to trainer #2. When the statue gets caught, jerking the dog, trainer #1 released the dog and followed behind him holding the chain. Trainer #1 slowly pulled on the chain to stop the dog, simulating the dog being stopped by the statue being caught by the tree trunk. Later, at the party the dog is seen sitting outside the open front door. Brad instructs the dog to fetch. The dog runs towards another teen and bites at his crotch. For this scene the actor was wearing a bag attached to the crotch area of his pants. The trainer familiarized the dog with the bag instructing him to "bite bag". The actor hissed at the dog as the trainer released him, giving him a verbal command to "get it".