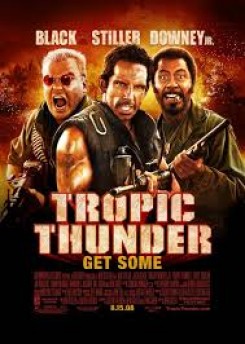 A group of high maintenance actors portraying soldiers in a blockbuster war film become too diva-like for the crew to handle, so the frustrated director dumps them off in the middle of a war-torn jungle to fend for themselves, which they mistakenly believe is a form of method acting.

For shots that included animals, wood chips were placed on muddy ground to make it safer for the animals to walk on. Scenes were filmed in separate shots and edited together later to make it appear as if the animals were walking longer distances than they actually were — they only traveled about 30 feet at a time. All grounds were checked for hazards ahead of time. Before filming began, all actors and crew members were instructed on handling the animals. All sets were open to only necessary actors and crew members.

During a fake movie trailer that runs in the beginning of the film for a movie called "Simple Jack," we see Jack (Ben Stiller) standing inside a horse stall in a barn, brushing and petting a horse. The grounds were checked for safety ahead of time. The trainer placed the horse on its mark and stood just off-camera as the actor brushed the horse according to the trainer's instructions.

Hunger and thirst make Jeff (Jack Black) delirious, so when he sees a water buffalo standing in a pond, he pulls out a tiny pocket knife and approaches the animal. The pond was only 2 feet deep and the actor kept a safe distance from the animal. Moments later, Jeff is lying on top of the water buffalo, as Alpa (Brandon T. Jackson) holds the animal's rope leash and walks it through the jungle. When they stop, Jeff gets off and throws up. A trainer instructed Jackson how to hold the lead rope and walk the animal. The trainer then helped Black onto the animal and stood a few feet away from the animal's end mark. Bertha, the water buffalo, loved the water. She wore a leg hobble and was given a bucket of grain so she would stand still.

Kirk (Robert Downey Jr.) leads the water buffalo through the jungle and into the compound where Tran (Brandon Soo Hoo) and his men are staying. A blanket covers Jeff, who is lying on the water buffalo. Jeff jumps off the animal and onto the ground. Gunfire breaks out and the men begin to fight. A trainer ran behind the camera to the buffalo's end mark while two other trainers stood between the beginning and end points to help guide the animal. A stuntman hid under the blanket on the animal's back and the actor took his place right before the blanket was removed, while the buffalo remained stationary. An actor dressed as a soldier led the buffalo away before the gunfight started. The American Humane Animal Safety Representative™ asked the production to level off the muddy path that the animal walked on to create safer footing. The actors and crew attended safety meetings with the American Humane Representative and the trainers regarding the handling of the water buffalo. The knife used to cut the ropes that bound Jeff's hands was a prop.

In several scenes throughout the film, the men are at their campsite and Bertha is standing or sitting nearby. For these scenes, which were filmed on a closed set, a trainer placed the animal on its mark and then hid in some nearby fake bushes, holding the lead rope the entire time. The campfire was fueled by propane and controlled by an off-screen crew member. The animal always remained a safe distance from the flame.

While on the set, Bertha gave birth. A veterinarian checked out mother and baby and determined they were both healthy and fine. The baby stayed with Bertha on set so they could bond. The baby was named Little Jack, after Jack Black.

Production provided documentation that the bat and insect seen in the film were computer-generated and that the panda bear was fake.

American Humane also monitored scenes with a lizard and a rooster that did not appear in the theatrical release.