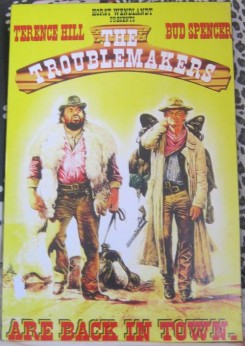 Troublemakers is a comic western about two brothers who are summoned home for Christmas by their mother so that they can receive the treasure left to them by their departed father. The oldest, Moses, is a huge mountain of a man who is married with ten children and supports them by tracking criminals as a bounty hunter. His brother, Travis, is known as the fastest gun in the west. On their way home for the holidays, they encounter one troublemaker after another. Travis actually has not seen his brother in years and Moses is reluctant to join Travis on the trip home. Travis finds a way to trick him, getting support from Moses' wife and children. Travis saves the life of an outlaw, Sam Stone who is about to be hanged, by shooting the noose in half and togther escaping the town on horseback . This enables him to convince Moses to join him in tracking down Stone and collecting the $ 4,000 reward for his capture, all the while traveling home for the holidays. Travis and Moses set out to capture Stone and in the meantime Moses' family sets out to get to grandma's house for Christmas. On the way, Travis and Moses meet two sisters, Bridget and Melie, who are trying to raise money to build an animal clinic. When bullies try to intimidate the sisters, the brothers take their part and send the bullies packing. Unfortunately, the bullies will not forget the humiliation and throughout the movie try to get the better of Travis and Moses, to no avail. Along with the bullies, they run into Sam Stone and his gang on more than one occasion. When Travis and Moses try to capture Stone during a bank robbery, the Sheriff and his deputy mistake them as members of Stone's gang. They get arrested, but break out of jail. Now they find that they are being pursued by Stone's gang, the bullies and a posse. All of them converge at grandma's house on Christmas Eve where there is a major slapstick brawl. Happily the brothers and the family are victorious, finally getting to celebrate Christmas and claim their treasure.

There is animal action throughout the movie which includes primarily horses and a variety of animals which are seen as background in the home of Bridget and Melie, the sisters who want to start an animal clinic. Barnyard animals such as chickens, pigeons, ducks and geese are also seen at grandma's house in a few scenes. The horse action was very basic and trained wranglers were always on hand in key positions and/or acted as the riders or wagon drivers on screen. When the bullies begin to taunt the ladies about setting up an animal clinic in the old west, one bully holds a chicken in his arms while he tosses a bullet into the collection box. He claims that the chicken in his arms can lay square eggs. For this scene, the chicken was merely placed in the arms of the actor. Travis comes to the ladies' rescue by making growling noises from inside the covered wagon marked "Animal Clinic." When the bullies approach the wagon, they are greeted by a bear who pops his head out from between the canvas flap and roars, scaring them and causing the one holding the chicken to release it. For this scene a bear puppet was used. The action happens quickly and we merely see the chicken flutter in the background out of frame. The chicken handler tossed the chicken gently off camera. The bear, whom we find is the pet of the ladies, is seen roaming around freely in their house, knocking over jars and sniffing at various objects. In one scene, the bear growls at Moses and he growls back at the bear. Later the bear is kidnapped by Stone's gang and held for ransom. However, we never really see this kidnapping, nor any more of the bear in the film. For the scene in the house, the trainer was alone on the set with the bear and camera crew allowing the bear to knock things around freely while being filmed. The sequence where Moses and the bear are growling was shot in cuts and the actor and bear were not actually filmed together. There are two scenes in which Travis is lining up a noose in his sights. Just as he is about to shoot, split the noose and rescue the man on the gallows, a small dog starts to pull on his pant leg. This happens when he saves Stone and then later in the film when he saves his brother, although they are in a different town and the dog is a different dog who is even bigger than the first. For both scenes, the dogs were trained in pre-production and responded to a verbal and visual command to pull at the pant leg. In the scene where Travis tries to free Moses from jail, he hooks a rope through the bars of the cell window and attaches the other end to the saddle horn on his horse. When he gives the horse the signal, instead of pulling the bars out of the wall, the rope pulls the saddle off the back of the horse and Travis along with it. For this scene, the saddle was rigged to be loose and the horse was not affected when it walked off, leaving the saddle and rider behind. Bridge and Melee have a pet python in addition to their bear. We see one of the ladies pick up the snake which is lying in a cage in the house. She actually just lifts the body and places their hard earned money underneath him for safe keeping. Later in the film, Moses' son gets bitten by a rattlesnake and the ladies are able to save him. When the boy is bitten, the scene is shot in cuts. The camera first takes in the boy, then the snake and then just the snake lunging at the leg which is filmed in a close up shot. The snake wrangler was present with the snake and held out a fake leg at which the snake lunged. Other animals in the film include a dove seen perched on the shoulder of Moses as he has his photograph taken and animal patients seen at the clinic as background atmosphere. A raccoon and a rabbit are seen in separate cages and a vulture appears in a cage and on the arm of Melie. Also, a horse and colt are seen in a corral. Later the colt is seen being led into grandma's house where he eats from the table. Various horses appear in the town scenes as background. When gunfire occurred around any horses or animals, quarter loads were used and additional sound was added in post production.