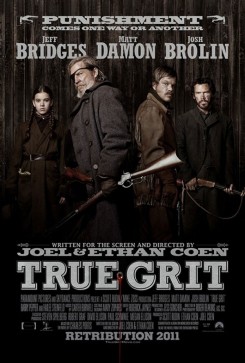 Mattie (Hailee Steinfeld) is a young woman who works alongside Marshal Reuben Cogburn (Jeff Bridges) to find who murdered her father.

All grounds were inspected for hazards and sets were closed off and secured. The dogs briefly seen walking in the background were cued by off-camera trainers. Horses were seen performing such mild action as being ridden, held by reins or tied to posts, and mounted/dismounted. For these scenes, well-trained horses were ridden by or surrounded by costumed trainers or experienced actors who were skilled at riding, mounting and dismounting. All actors were given riding lessons or instructed on the handling of the horses before filming began.

All running/galloping scenes were well choreographed, and actors used caution while on the horses. When horses pulled wagons or carriages, the drivers were experienced and horses were accustomed to the pulling action. These particular horses were accustomed to walking on hilly terrain and on snowy ground. Animals were never around gunfire (except for a couple of scenes involving powder blanks or visual effects using prop guns that emit smoke and flash) — the actors pantomimed/simulated the action of shooting each other. During a few gunfire scenes, several horses “reacted” to this or laid down as if shot. These were well choreographed scenes — costumed trainers cued the horses to “dance/prance,” and a couple of horses were specially trained “lay down” horses that were cued to lay for a brief moment.

After being cued to lay down, the trained horses were then replaced with stuffed prop horses to make it appear as if the horses were injured/killed. When Cogburn (Jeff Bridges) appears to stab a horse in the leg while it runs, this was a rubber prop knife rigged with fake blood that oozed out when triggered. At the end of this scene, Cogburn appears to shoot and kill the now-collapsed horse — the horse was a trained “lay down” horse, and the actor merely pantomimed the shooting. When Mattie (Hailee Steinfeld) first rides her horse and it rears/acts feisty, this was a combination of a stunt double who cued the horse and the actual actress, who was well rehearsed on getting the horse to “prance.”

During the scene in which Mattie runs her horse into the deep river and crosses it, this was filmed in separate shots involving a trained live horse, a mechanical/animatronic horse, and visual effects. Safety boats were in the water, along with trainers and stunt persons. The river had been carefully checked for hazards, and ramps were used to get the horse easily into and out of the water. A stunt person rode/guided the horse for all of this scene except the close ups, which took place in the shallowest part of the river, but it was edited to make it look as if the girl was on it the entire time. This horse was specially trained and very well rehearsed to swim, and the swimming action was actually only a short distance at a time with breaks in between.

The horse appearing to pull Mattie and Cogburn out from the snake cave never actually pulled them — trainers held the rope and created tension on it while the camera showed the people being hoisted up out of the cave in the absence of the horse.

When a boy and his father appear to torment a mule by hitting it with a stick and a broom, this was merely pantomimed — the animal was never touched with the objects, but was instead cued by the off-screen trainer to “prance” as if reacting.

A falcon is seen on the shoulder of a corpse hanging from a tree before flying off. For this brief and mild action, a trainer placed the bird, who was equipped with a monofilament line on its leg, on its mark on the “corpse” (dummy). The trainer then cued the bird to fly to a second branch, which had food placed on it beforehand to entice the bird to fly to it. The bird was retrieved right after.

When Mattie was in a cave filled with snakes, this was a combination of real snakes, rubber snakes, and CGI. The real snakes were placed on their marks and allowed to slither along at liberty, doing whatever came naturally for a brief moment. The cave set was enclosed and secured, and the snakes were retrieved after this brief scene. Visual effects/CGI finished off the scene, including biting, being tossed, and being shot at.