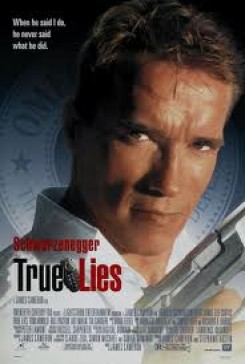 True Lies is a fast moving satire of every action/adventure movie you've ever seen. No expense was spared to produce the spectacular special effects. Although there are countless scenes containing violence, they are not performed realistically, but tongue-in-cheek, almost cartoon style. Harry Tasker leads a double life. To all outward appearances he's a rather dull businessman, living an ordinary middle-class existence in suburban Washington D.C. with his wife Helen and his daughter, Dana. In reality, he is Harry Renquist, a Rambo-style spy for the U.S. government's ultra secretive Omega Sector, whose motto is "The Last Line of Defense". At the moment, Harry and his partner, Gib, are trying to prevent Mideastern terrorists from smuggling nuclear warheads into the U.S. Harry's wife and daughter haven't the slightest clue as to what Harry really does. In a humorous sub-plot,, a bored and neglected Helen becomes involved with a smarmy used-car salesman, who passes himself off as a super spy. His real motive is to seduce her. In an effort to add some spice to the still faithful Helen's life, Harry secretly arranges for Helen to go on a phony assignment as a spy. Unfortunately, the real terrorists intervene and Helen is taken hostage. Before the final reel , even Harry's daughter is caught up in the action until Dad saves the day for his family and country.