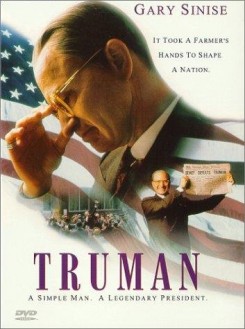 Truman is an interesting Biographical film about Harry S. Truman, the thirty-fourth president of the United States. The film begins in 1948 with Truman's whistle stop tour campaign for his re-election. While sitting on the train he pens a letter to his wife, Bess, romancing about the past and the path in his life that brought him to this point and time in his career. Then the story flashes back to 1893 and moves forward, covering important and historical events that lead to his campaign for re-election. We see Truman go from private citizen, senator, president, to private citizen again. It is an insight into the feelings and reasons for doing what he did during his personal and political life. He was a man not afraid to stand up for what he believed was constitutionally right even if his personal views were different.

The animal action was minimal with the use of horses, a mouse and a dog. There are also several scenes where farm animals are used as background atmosphere. In one scene Truman is on a battlefield during W.W.I. He is riding a horse in the rain around the camp when they are attacked. The horse falls and the men begin to scatter. This scene was done using a trained falling horse. According to AHA Guidelines, the ground had been dug up and filled with sand and peat moss for the protection of the horse. The area around the battlefield had been cleared of any debris prior to the shoot. While at the White House, Bess and Margaret, his daughter, make Truman a cake for his birthday. As he is blowing out the candles, Margaret sees a mouse and screams. The mouse, unaffected by the scream, calmly walks around the corner and out of the room. To accomplish this scene, the trainer merely released the rat and retrieved it after it rounded the corner. The rat and the actors were not on the set at the same time.