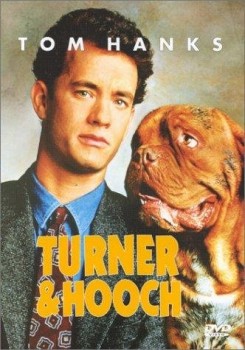 An old man is murdered because he was eyewitness to a crime. When the police arrive the old man's dog, Hooch, is guarding his master's body and won't leave. Because Hooch is slightly injured, Turner, the investigating officer thinks he may have scuffled with the murderer and may be the only link to solving the crime. Turner decides to take Hooch home but first he takes him to a vet for treatment. Turner is attracted to the pretty vet, Emily, while Hooch finds Camille, Emily's Collie, very alluring. A meticulous bachelor, Turner has difficulty adjusting to life with Hooch, an untidy hulk of a dog, but in spite of their differences, Turner grows very fond of Hooch. Likewise, Hooch grows fond of Turner and proves himself a valuable sleuth and guardian. Turner and Hooch is a warm and amusing adventure comedy.

Several dogs were used to portray Hooch. Each had their own special talents and all were Douge De Bordeaux, an unusual French breed built something like a Rottweiler with a wrinkled face and lots of personality. The animal control officers that used a Come-A-Long (Ketch-all) to get Hooch away from his master's body were actually two of his trainers who were faking the difficulty. The door Hooch butts his head through had been prepared to break away easily. Stage blood and makeup were used for Hooch's injuries. He was taught to crawl without using his front legs. When he makes a jump, he actually lands on a thick layer of foam rubber.