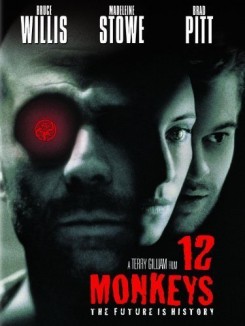 Twelve Monkeys is a futuristic adventure which takes place in the year 2035 AD and is about a prisoner, Cole, sent from subterranean lodgings to the surface. His objective is to collect samples from the surface, including insects, then bring them back to the scientists in his underground world. The scientists are striving to figure out the nature of the virus that obliterated the population in the year 1997. The virus only attacked humans, leaving the planet inhabitable by only plant and animal life. They send Cole back and forth from the present to the past several times so he can find the source of the virus. They believe that by doing this they may discover the reasons the virus only attacked humans and then develop a vaccine to help the few survivors, so that once again the people could inhabit the surface of the earth.

When Cole ventures to the surface and back and forth in time, he collects samples of different insects. In the present year, 2035, he plucks a spider from a spider web and puts it into a plastic tube. In 1994, the past, while in a sanitarium he finds a spider crawling along a window sill and grabs it. He puts it in his mouth when he hears someone approaching. A real spider was used for the scenes of the actor picking up the spider and putting it in the tube and picking it up from the window sill. A fake spider was used for the shot of the actor putting it in his mouth. The actor was prepped prior to the shoot to make sure he did not harm the spiders when picking them up. The spiders were retrieved by their trainer at the end of the shoot. After putting the spider in the container, he turns to leave and runs into a plastic Christmas tree in an abandoned department store, spooking some pigeons nesting. To accomplish this scene, homing pigeons were used. The trainer had merely released the pigeons from a box. They immediately returned to their box and were retrieved at the end of the scene. While still on the surface in 2035, Cole walks in front of what used to be the City Hall building. He sees a lion on top of a building prowling back and forth as it roars and an owl sitting on a perch. He then sees a huge bear rising on its hind legs and proceeding to roar. This scene was shot in cuts with the trainer of both the lion and the bear merely using voice and hand commands to get them to move and roar. The trainer for the owl placed the owl on his perch and used voice commands to call the animal to him with food as a reward. The exterior shot of the area was secured by a net so that the owl could not fly away and be harmed. There is a scene at a zoo where exotic animals are seen in their habitat areas. A gorilla is seen pacing in the moonlight in an outdoor pen while a Siberian tiger walks across the lawn. This scene was filmed at the Baltimore Zoo with the gorilla being a man dressed in a gorilla suit. While Cole is in the sanitarium, he meets a psychiatrist, Dr. Railly. When he is sent back again, the year is 1996. He kidnaps the doctor and when she doesn't show up at home, her friends get worried and call the police. As the police are questioning her friends, her cat is walking around the answering machine on the table. There are a few scenes of the cat sitting on the doctor's drafting table or being carried by her in her apartment. When the cat walks around the answering machine, the trainer had placed food in strategic areas on the table and used voice and hand signals to cue the cat. In a scene where the doctor and Cole are going to the airport to leave town, they see a couple of giraffes crossing a bridge. At the same time, a man is unloading papers at a promenade and four elephants come around the corner with trunks lifted, trumpeting their arrival. Then the elephants are seen crossing a bridge. For the scenes with the elephants, the trainer prepped the animals before hand with several rehearsals for both scenes. He then used voice commands and verbal praise along with treats to cue them for their stunt. Stock footage was used for the scenes involving the giraffes. There is a scene at a party where the cooks in the kitchen are watching TV. On the television, a monkey is shown being put down a pipe in the ground in an attempt to save a small boy. For this scene, the monkey was placed inside a wire basket by his trainer and then lowered by a hoist down the hole only far enough to emerge his lower body. He was only in the hole for a few seconds and then retrieved by his trainer after each take. He was properly prepped for this scene so he was not stressed. Stock footage was used for scenes of monkeys seen on television in a laboratory and flamingo's flying through the air.