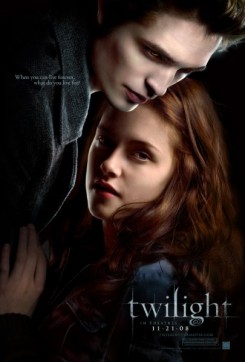 When Bella Swan (Kristen Stewart) went to live with her father in Washington, she never expected to fall in love -- let alone with a vampire who wanted to taste her blood. Their forbidden love would complicate their lives and threaten their families.

While drinking from a pool of water in the forest, a deer is startled and runs off into the trees and through the forest. Then a shadowy image of a person grabs the deer around the middle as it jumps over a fallen tree. Several trained deer were used for this role, one at a time. Trainers brought the trained deer into the woods on a leash and led it along the camera’s choreographed path until the deer was familiar with its path and comfortable with the action. Once adequately rehearsed, the deer was let off its leash at its starting mark and cued to run toward a trainer waiting at the end mark. The trainer at the end mark used a grain bucket to help motivate the deer. Only necessary cast and crew members were allowed on set. Several trainers were scattered around in case the deer veered from the path, which none of them did. During some takes, a wireless microphone was attached to the deer’s harness to capture the hoof sounds. The scene of the shadowy man grabbing the deer was filmed in separate shots. The crew placed a special bright light on one side of a log and the deer jumped over the log, creating a silhouette. Part of the scene was a special effect.

Production provided documentation that the dead deer that the Cullen family covets was a prop.

Production also provided documentation for the various stuffed birds and taxidermy animals in the biology classroom.

Due to late notification and/or limited resources, American Humane did not monitor any of the wolf, dog or worm action.