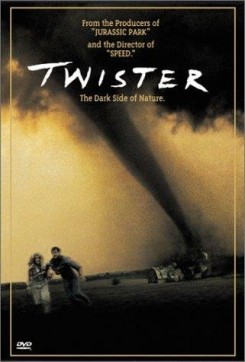 Twister is a film about a group of people who specialize in the study of tornadoes. Among the group is Jo, a young female scientist, who as a child witnessed her father being picked up by a tornado and carried to his death. Since that day, Jo has been determined to find a way to track tornadoes and devise a warning system that would give people the necessary time to safely find shelter. Jo and her crew are out in the country setting up their equipment to track a major storm front when the weather satellite predicts up to six tornadoes expected to hit the area that day. In the meantime, Bill, her estranged husband, shows up to pick up their divorce papers. However, when Jo shows him Dorothy, the machine that he designed and that she recently had had built, the temptation is too great for him. He goes with Jo and her crew on their chase of the twisters. Dorothy is a machine that when put inside a twister, will monitor its path and wind velocity, giving the necessary data needed to track it. They try several times but fail to get the machine up into a twister. During this period, Jo and Bill are literally in the middle of three of the largest twisters ever seen in that part of the country. The crew, after needing to take cover themselves during one of these twisters', hears on the radio that it is headed straight for Wakita where Jo's Aunt Meg lives. They make it in time to rescue Aunt Meg and her dog from her crumbling house, but not early enough to warn them before the twister struck. Now Jo is more determined than ever before to get Dorothy up and into a twister.

In the beginning scene of the film, a twister is heard coming towards a farm house. The farmer runs inside the house and gets his wife and daughter, taking them to the underground shed. The little girl yells for her pet dog to follow and the dog is seen jumping off of her bed and running out the front door. The family frantically runs across the yard towards their underground cellar with the dog not far behind. With all of the noise coming from the approaching twister, the farmer does not hear the dog barking behind him and inadvertently shuts the cellar door. The little girl hears the dog barking and tells her father. He opens the cellar door, letting the dog in. The mother and daughter are huddled together with the dog sitting in the arms of the little girl when the twister rips the door away, picking up the farmer and carrying him away. The dog is seen barking as the man disappears. This scene was shot in cuts. When the dog is seen sitting on the bed and then following the actors out into the yard, the trainer merely placed the dog on his mark and used verbal commands to cue the dog to follow the actors. For the portion of the scene when the dog runs from the porch to the cellar barking, trainer #1 released the dog and trainer #2 who was waiting inside the cellar, called to the dog, causing him to bark outside until the actor opened the door. In another scene when Jo and Bill are chasing a twister, they see a cow go sailing through the air in front of their truck. Then a cow is seen crossing in front of them again. In post-production through special effects, the shot of the animal supposedly flying through the air was inserted into the background. At no time was a cow ever off of the ground for the shooting of this scene. When Jo and Bill are finally successful in getting Dorothy off the ground, the twister changes its course and heads straight for the couple as they are making their escape. As they head towards a farm in search of shelter, the couple passes a paddock with two horses inside. The horses are seen running from one end of the paddock to the other as the twister approaches. One of the horses is seen rearing up right before a gust of wind demolishes the paddock. A trained rearing horse was used for this scene.. The paddock made of balsa-wood, was triggered to blow away from the horses. Later, the horses are then seen unharmed and running through a field Other animal action consists of Aunt Meg's dog, Moose. Moose is seen walking out of Aunt Meg's house and later is seen on her bed before the twister hits the house. When Jo and the crew get to aunt Meg's house, they find her and Moose in the basement. Moose is sitting next to her and barks when he hears Jo and Bill calling. For all of the above scenes, the trainer merely placed the dog on his mark and used verbal and hand commands to cue him to his next mark or to speak. Later, Bill is seen lifting the dog out of the window and carrying him to safety. Aunt Meg is taken to the hospital and Moose goes with the crew and is seen riding in the van. When he is seen getting out of the van he is on a leash. There are a few scenes of cows standing in fields in the background. The cows were kept in a herd formation by two wranglers on horses. American Humane was represented on the set by Cedar Bend Humane Society, the Iowa Federation of Humane Societies, and the Oklahoma S.P.C.A.