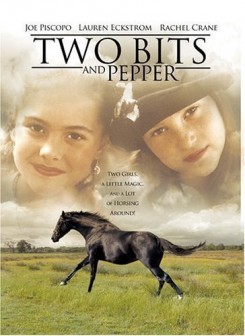 Two Bits and Pepper is a family film about two nine year old girls, Tyler and Katie, who adore a pony named Two Bits and a horse named Pepper. Both horses are owned by Tyler who has a special love for Two Bits. She spends every day with her best friend, Katie, who gets to ride Pepper. When kidnappers come to their small rural town, the horses become heroes and save the two girls from harm. Tyler and Katie want desperately to ride Two Bits and Pepper into town, but Tyler's mom is adamantly against it because they would have to cross the highway to get there. Mom remembers when a drunk driver drove off the road hitting and killing Two Bits' mother and she fears the ride into town would be too dangerous. Cleverly, the girls find a way through a tunnel that runs under the highway and proceed to take the horses into town. Tyler's mom spots them and reprimands her daughter. In defiance, Tyler runs away to spend the night at Katie's house. As this is enfolding, two bumbling thugs with a record of kidnapping drive into town with mischief on their minds. When they find out that Katie's wealthy parents are traveling outside the country, they make a plan to kidnap her for a large ransom. What they did not plan on was that these two bright little girls have two smart horses as friends. We discover that Two Bits and Pepper are not only talking horses, but show great intelligence and bravery in saving the girls. However, the thugs manage to burn down Katie's house and nearly kill Two Bits before they are brought to justice.

Horses are seen throughout the film along with background animals which include cows, pigs, an owl, a cat, a raccoon and an opossum. Although the horses are seen talking to each other through the use of voice overs, no attempt was made to make the mouths of the horses move in synchronization with the dialogue. In one dream sequence, we see a flashback of the accident that killed the mother of Two Bits. She and her little pony are grazing in a field when a drunken driver crashes through the fence and hits the mare. This memory dream wakes Two Bits from his sleep. The scene was shot in cuts. The two horses were placed in the field by their trainers who used hand signals to get the horses to both stay in place and to react. The horses were not actually present when the car crashed through the fence. A special effects mirror was used on the vehicle to make it appear as though the car was very close to the horse, when in reality, the car was never closer than four feet from any animal. It never made contact with the horse. The speed of the car was increased in post production. Toward the end of the film, Two Bits stops the kidnappers on a bridge by rearing up in front of their car. The frustrated criminal gets out of the car and fires a gun in the direction of Two Bits in order to make him move. He inadvertently hits him and runs away just as the sheriff and his men appear on the scene. We see the wounded pony lying down being stroked by Tyler. This scene was also shot in cuts. To get the pony to rear up, the trainer used verbal and hand commands. The car was moving very slowly when the pony appears on the bridge and was never close to the animal. The pony is not seen being shot, but is seen lying on his side with a bullet wound in his chest. The appearance of a wound was created using stage blood. In this scene, as in several other scenes, the pony merely laid down at his trainer's commands. After the criminals are arrested, we see Two Bits at the Equine Medical Center being operated on for the removal of the bullet. The animal is in surgery, wrapped in surgical drapes, surrounded by medical personnel and in the midst of the difficult operation. This scene was shot in an actual equine hospital. The trainer was able to get the horse to lay down by gently lifting his front legs and leaning him onto the table which was padded. Several trainers and vets in surgical costumes were on hand to keep the animal in a comfortable position. Stage blood was used to give the effect of an actual operation. The animal was on the table for just a few minutes and no sedation was used. When Two Bits and Pepper are on the trail of the kidnappers, they encounter poachers on horseback who chase them down. Pepper escapes by jumping over a fence, but Two Bits is too short to make it over the obstacle. The thieves lasso the pony to take him to market. Pepper tracks Two Bits to a parked horse trailer and manages to pick the gate and free his little friend who jumps from the trailer just as it begins to pull away. These sequences were shot in cuts. It was experienced wranglers who rode the horses and roped the pony who was by then standing still by the fence. Pepper is a trained jumping horse. The trainer used hand signals to get him to jump the fence which was only one and one half feet high. The barbed wire that appears to be around the wooded fence posts was made of rubber. Both horses had been trained in pre-production to use their mouths to open the latch-type gate. The jump off the moving trailer was shot in cuts. The pony is seen from behind as the gate swings open and the animal begins to step out of the trailer. We then see the horse shot from outside the vehicle as it steps out of the trailer and the trailer pulls away. The trailer was stationary when the pony actually stepped out. The driver of the truck was cued once the horse was clear to slowly began pulling away. The illusion is that the trailer is moving while the horse is leaving. In one scene the horses are seen approaching the burning house. The horses were conditioned in pre-production to be around fire. The fire on set was controlled by the prop department using flicker boxes and special effects. The scene was shot in cuts and the horses were never close to the flames. For long shots of Pepper and Two Bits galloping, trained stuntwomen were used in place of the young girls. In the scene where a posse is being assembled to find the kidnapped girls, extras who had riding experience were used and the horses basically walked around an area in which there were parked cars. The cars were placed so that ample room was given the horses for movement.