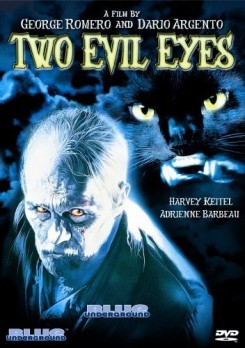 Definitely not recommended for cat lovers, Two Evil Eyes is a horror film with two episodes, each one based on an Edgar Allen Poe Story. The second episode is titled "The Black Cat" and involves Rod, a crime photographer, who is compiling photos for a book illustrating gruesome murders. When his girlfriend Anabelle's cat bothers him, Rod sets his camera on automatic and photographs himself as he strangles the cat to death. As his mind and behavior degenerate further, Rod suffers hallucinations in which the cat constantly reappears.

Fake and realistic-looking mechanical cats were used throughout filming. Whenever a real cat was used, it was handled with care. Both a live and a mechanical cat were used for the strangulation scene. The actor gently handled the real cat which was replaced with the mechanical one to film the strangling. In a medieval fantasy Annabelle brings her dead cat to Rod and the cat comes to life and she hugs it. This scene was shot in cuts using a fake, mechanical and real cat. The cat reappears and Rod attempts to strangle him again, but Annabelle discovers them and struggles to save her cat. Again, this scene was filmed in cuts using both a real and fake cat. In the horrifying finale, when the police break through a wall, no real cats appear. Only mechanical cats and special effects were used for this sequence.