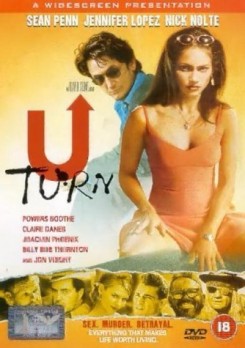 U-Turn is a film about a drifter, Bobby, whose car breaks down in the desert and he wanders into a desolate town where he finds himself being both slugged and seduced by the locals. One of them, the richest man in town, hires Bobby to kill the rich man's wife.

In the beginning of the film, two vultures are spotted picking at what is suppose to be a dead wolf. The wolf has blood coming out of its mouth and its stomach is open, revealing intestines, upon which the vultures are snacking. Applied to a fake dog, were chicken giblets to simulate the dead animals intestines. The trainer placed the vultures on their mark and retrieved them at completion of the shot. In another scene, a cat is meandering A to B across the road when Bobby, supposedly hits the cat with his car. The trainer released the real cat for the A to B shot crossing the road. The real cat was then replaced by a fake one for the "hit". While at a cafe, when a cat rubs up against Bobby's legs, he lifts his foot and supposedly kicks the cat. Later the cat is seen jumping onto the cash register, hissing at Bobby. Flo, the waitress, picks it up, holding it while Bobby pays her. The scene where the cat is supposedly being kicked was shot in cuts. The actor merely placed his foot under the real cat and slowly lifted it with his leg. Later, in post-production, the film is placed in fast motion to make it appear as if the actor kicks the cat. When the cat is supposed to be kicked, a matching "stuffy" cat was used. For the segment of the cat jumping on the cash register, the trainer released the cat and used verbal and hand signals to cue him. Other animal action consists of a dog seen several times on the sidewalk with a blind man, a tree full of vultures, a rattle snake crawling across the top of a rock, a crow sitting on a dresser and sitting on an actor's back, and a scorpion on a faucet. There is also a scene where a dog drinks out of a water faucet. American Humane was first notified that production would not be using animals in the film. It was not until the end of shooting that our office received a call informing us that they did indeed use animals. After conferring with production, the trainers, and screening the film.