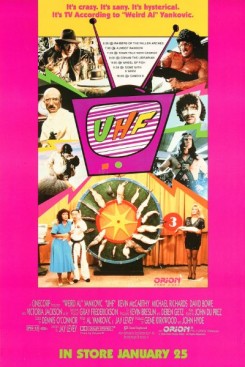 George Newman is a modern day Walter Mitty, who escapes his hum drum existence when he becomes Indiana Jones or Conan in his own brand of adventurous day dreaming. In reality George is one of life's all-time losers. After George is fired from another job, his Uncle Harry hires him to manage a small UHF television station that Harry, a compulsive gambler, has won in a bet. In spite of, or because of (?), George's off-beat programming the station's audience grows rapidly, and George incurs the wrath of the mean-spirited owner of the town's other TV station. Most of the gags misfire in this frequently offensive farce, but there are some occasionally funny moments

In a party scene the family dog, while trying to retrieve a piece of meat, jumps into the punch bowl. A seal sits on a car hood during a commercial for used cars. In George's version of a game show, many fish are nailed to a spinning wheel. The fish were dead fish purchased at a market. In one of George's programs, "Raul's Wild Kingdom", there are an assortment of animals in cages. At one point Raul picks up an ant farm and shakes it, destroying the tunnels. In another scene Raul teaches poodles to fly by throwing them out a third-floor window where they land in a pile. The poodles were fake. Although the real poodles were actually treated very well on the set, we find the scene in the film offensive. We also find the scene with the spinning fish equally offensive, but since no animals were harmed in the making of this film we are rating it "Acceptable".