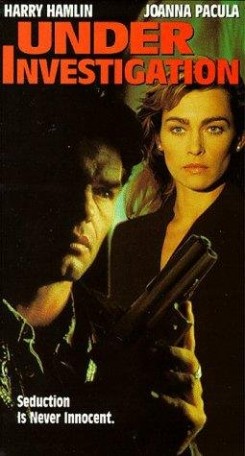 Under Investigation is a murder/mystery involving Harry Keaton, a cop, Mr. Strong, a recluse artist, and his wife, Adrian. Harry has been divorced from his wife since the death of his son Danny a few years prior. He has a girlfriend, but has a rough time committing to her. In the coarse of a murder investigation, Harry meets Adrian Strong, a young, beautiful woman, who has been separated from her artist husband for only six months. Harry and Adrian immediately fall is love, or so it seems. Mr. Strong is the prime suspect in a murder case, but after Strong's suicide, we are left wondering if he really was the murderer, or was it possibly someone else, perhaps even the sweet Adrian?

Harry has a pet snake, Emerson, who is present in several scenes throughout the movie. Emerson is seen being held, petted, lounging on the bed and the bathroom floor and being put into his aquarium. This was a tame non-poisonous snake and these scenes were all accomplished by the trainer placing the snake with the actor accordingly. Dolphins are also present in one scene swimming at a marine park. This was filmed at an actual aquarium.