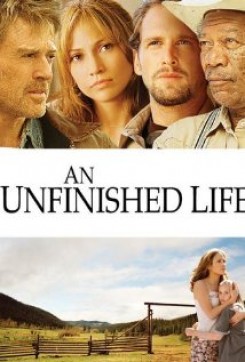 Jennifer Lopez plays Jean, a single mother who moves in with her estranged father-in-law Einar Gilkyson (Robert Redford), a retired rancher living on a lonely stretch of rugged land in Wyoming. With a precocious 11-year-old in the mix, eager for a father figure and to learn about life in the West, Jean and Einar must learn to forgive past mistakes if they hope to forge a new life together as a family.

While Einar milks a cow in several scenes, a few nearby cats drink bowls of milk. A raccoon appears amongst the cats, also drinking from a bowl. From time to time, cats are seen roaming around the barn as Einar does his chores. On the director's cue, trainers released the cats and used buzzers to cue their action.

To attract the felines, trainers smeared cat food in the bowls and then added milk before the action was filmed. For scenes in which the raccoon appears, trainers placed a waist tie on the animal and positioned the raccoon on mark. An off camera trainer held one end of the waist tie, and the cats were then put on their marks by handlers who stood nearby throughout filming. Wranglers showed Redford how to milk the cow before filming began.

A three-year-old brown grizzly bear makes his acting debut in this feature film. In one scene, the bear roams around the ranch area and then wanders along the roadside. Later, the bear is seen wandering around an alley and in people's yards. Kids on bikes and on foot come near the bear as he peers inside a garbage can. A police car follows the bear through this residential area.

To cue each of these simple movements, the trainer placed the bear on mark and used a food stick to attract his attention. The grounds were checked ahead of time for any hazards or debris, and production had the road closed to traffic during filming. Activity in the town was filmed in front of a green screen and the people were added in later during post production.

Another scene shows Einar mounting his horse and riding toward the bear with his rifle aimed straight at him. The sheriff pulls his car in front of Einar before he can shoot the animal. For this scene, the bear was filmed separately and the footage was added in during post production.

Later, the bear is seen in a cage on the back of a truck that passes Jean and her daughter as they drive to Einar's ranch. The trainer doubled as the driver anytime the bear was shown traveling. Throughout the movie, in order to get the bear to lunge against the cage or to look or walk in various directions, a trainer would stand outside the cage holding up food.

At Angie's Zoo, Einar and his granddaughter attempt to free the bear and set him loose into the wild. They position their truck, which has a cage on it, up against the bear's barred enclosure. When Einar opens the cage, the bear attacks him. This attack sequence is made up of several separate shots. A trainer situated the bear in the enclosure and then spent a few minutes playing with him before filming began. In order to make the bear walk toward him, Redford threw some meat into the cage. The trainer then stood in for the actor when the bear gets out and attacks Einar. This bear is used to play-wrestling with the trainer; although the two are having fun, it appears on screen as if the bear is attacking the man.

Both cages used for this scene were opened and closed via a pulley system operated by an off-screen trainer. The bear accessed the cages using special ramps, and the space between the two cages was blocked by portable metal fencing.

The informal zoo set was made especially for these sequences and closely supervised by all of the trainers and American Humane Safety Representatives. Some of the animals were in cages, which had been previously inspected for safety and comfort. Other animals appeared on the grass near the cages; these were placed on mark by their trainers with food spread on the grass to keep them in place. All of the trainers stayed just off camera near their animals during filming.