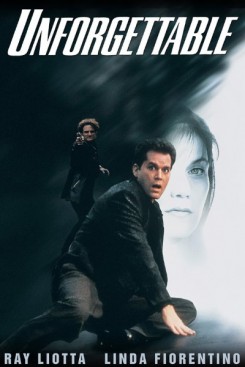 Unforgettable is a suspense drama about David, a King County medical examiner. David's wife, Karen, was murdered the previous year while working in her office, above their home garage. She was a lawyer and often worked late at night. Karen and David were having marital problems. When the police arrived on the scene, David, a heavy drinker, was found passed out in the driveway and Karen dead in her office. He was arrested for the murder, but was later released for lack of evidence. One year later, David is still working with the police department. While at a grocery store murder scene where a robbery and shooting have taken place, he discovers a curled up match book and candy wrapper identical to the ones left at the scene of his wife's murder. This gives David hope as he takes the items back to the station to see if they match the evidence in his wife's file. In the meantime, David visits a doctor at her laboratory, who is working on an experimental drug made out of spinal fluid. When drawn from the body it can bring the knowledge stored in the donor's brain into the recipient's brain, providing the animal or person with the donor's knowledge plus past and present memories. It has never been tried on a human before, but David convinces the doctor to let him be part of her experiment. He removes some spinal fluid from the body of a victim from the grocery store murders and the doctor then injects it into David, recording his reactions. In his mind he sees the robbery/murder unfold and feels the fear and terror that the victim felt, as well as the image of the robber. David then identifies the robber for the police. The man is shot while resisting arrest, denying David the opportunity to talk with him. After injecting himself with fluid from the deceased robber and not finding the answers he needed regarding his wife, he then steals some of his wife's fluid. David injects himself with the serum/fluid combination and then watches as his wife pleads for her life, moments before her death. What unfolds before his eyes is not what he expected as the true murderer is revealed.

The animal action is very mild. When David goes to visit the doctor for the first time at her laboratory there are a few rats and a cat seen in cages. The doctor has a maze in which she places the cat and a rat. She releases the rat and cat into the maze and the cat supposedly proceeds to chase the rat. Before the cat can reach the rat, the doctor picks up the rat from the maze. The doctor then gets another rat and proceeds to inject it in the neck with a serum and then places it inside the maze. Again the animals are seen running through the maze, except this time a rat was injected with serum from another rat that is familiar with the maze. This enables the rat to make it to the end of the maze before the cat catches him. The scene was filmed in cuts. For this scene, the trainer merely placed the cat and rat in the maze and used a buzzer to cue them to their next mark. When the animals are running through the maze, the camera cuts back and forth from the cat to the rat. The syringe is never seen making contact with the animal. When David injects himself with the killer's spinal fluid/serum, a little boy is seen in his mind in a dark basement. The boy realizes he is not alone in the room as a dog starts to bark. He then picks up a pipe and swings it at the dog hitting him until the animal appears to be unconscious on the floor. The scene was filmed in cuts. A real and a stuffed dog were used. The stuffed dog was used for the shots of the dog supposedly dead on the floor. The pipe is never seen making contact with the real dog. The dog was on a lead chain and the trainer merely cued the dog to bark.