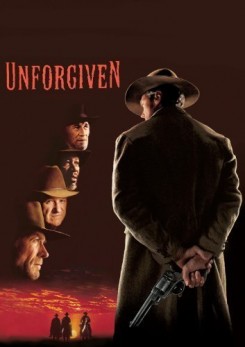 Unforgiven is set in Nebraska in the late 1800's. William Munny leads a hard, but simple life as a hog farmer. He's a widower with two children and, although his wife has been dead for three years, he still mourns her loss. He's very different from the Will of his youth. That Will was known as a vicious thief and murderer, but that was before he married his beloved Claudia, who made a new man of Will. Since she died of small pox, Will has done his best to raise his children decently, but it's a struggle. One day a young stranger, known as The Schofield Kid, shows up at the farm with a proposition. The Kid is looking for a partner. It seems a violent and vindictive customer has cut up a whore's face real bad and all the other ladies of the whore house want revenge. They've pooled their savings and are offering a one thousand dollar reward to kill the two men responsible for the disfigurement. The Kid's uncle has told him of Will's reputation for meanness and fearlessness and The Kid offers Will half of the reward money if he'll join him as a partner for the killing. Will says he's a changed man and sends The Kid on his way, but The Kid lets him know which trail he'll be taking if Will changes his mind. After considering his impoverished circumstances and how the whore's gold could help his children, Will changes his mind and saddles up, telling his young son and daughter he'll be gone for just a few weeks.

In opening scenes on the farm, Will is attempting to move a hog out of a muddy pen in order to segregate the supposedly sick animal from the healthy ones. He pushes and shoves trying to budge the stubborn animal. The actor exaggerated the efforts of pushing and shoving and no real force was put on the hog which, of course, was not really ill. For the various scenes involving horses, trained rearing and falling horses were used. In several scenes Will's horse, supposedly unaccustomed to being saddled and ridden for many years, resists being mounted and prances about or attempts to throw Will. Will's horse had two doubles that were more spirited and not accustomed to a saddle that were used in these scenes. A stuntman doubled for the actor and the scenes were shot in cuts. In a scene where the whores sling mud at men on horseback, care was taken to stay away from the horses' eyes. The horses were allowed to respond naturally to the thrown mud and spin around and move away and were not harmed in any way. Just prior to an ambush scene, men are shown attempting to brand a calf. There was no actual branding. As a man on horseback chases a calf, his horse is shot and falls, pinning the man underneath the horse. Gunfire explodes around them as the downed rider eventually crawls free of the dying horse. A trained falling horse did the fall and then another horse, with stage blood applied to his neck, did a lay-down. Quarter loads were used for the gunfire and the sound was augmented in post production. All the above action was shot in cuts. While traveling through a wooded area, men shoot at pheasants from a platform of a moving train. As the pheasants fly into the air, two of them go down, apparently shot. According to the production company, each pheasant had their own wrangler who released the pheasant into the air. The two that went down were tied with a monofilament line connected to a fishing pole. The line was reeled in and the two pheasants fell in a soft area and were not harmed. The sound of the gunfire was added in post production. Other animals seen primarily as atmosphere are chickens and a cow. Unforgiven was filmed in Canada and the Calgary Humane Society represented American Humane on the set. Because we were notified of this production after some animal scenes had already been filmed, not all animal action was monitored. However, after discussing the staging of these scenes with the production company, we are rating Unforgiven "Believed Acceptable".