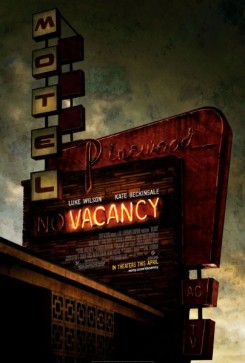 A couple (Luke Wilson and Kate Beckinsale) are stranded at a motel when their car breaks down on a road trip. The motel manager is happy to let them check in but the couple quickly discovers that checking out may not be as easy.

All cast and crew were instructed on the handling of the animals before filming began. The animals were well-rehearsed so they were comfortable with their actions. A raccoon is in the middle of the road and David (Wilson) swerves to avoid hitting it. This scene was filmed in separate shots. For the first shot, the trainer placed the raccoon on its mark and hid nearby. For the shot with the vehicle approaching, the animal was replaced by a fake raccoon. For the shot where it crosses behind the vehicle, the raccoon was set back on its mark by the trainer and called to another, waiting trainer. The vehicle was stationary when the raccoon was in the shot. The raccoon was on a leash and controlled by the trainer for the entire scene. Production provided documentation that the prop raccoon was fake. Rats crawl on and around David and Amy (Beckinsale) as the couple attempts to escape from their motel room through a tunnel under the building. Trainers placed rats in the secured tunnel and waited nearby to capture them at the end of the take. Boards were used to block off one end of the tunnel while still allowing the cameraman access to the area for filming. Three rats were placed on the actors while they were in the tunnel. The actors were instructed how to gently push the rats off themselves. Creative camera angles gave the appearance that the actors were crawling through the rats. The actors, however, remained behind the animals for the scene. An officer walks a dog through a crime scene. The trainer leashed the dog and handed the leash to the actor right before filming began. Bacon grease was placed on the ground to entice the dog to sniff the ground, giving the appearance that it was tracking something. As Amy turns on a light switch, we see a roach crawling nearby on the wall. As she enters the bathroom we see the roach now crawling on the floor and under the rug. A wrangler placed the insect on the wall right before filming began and kneeled below frame to retrieve the insect afterwards. Then the wrangler placed the roach on the floor and it crawled to the rug which was already pushed up so the insect could get under it easily. Again the roach was retrieved by the offscreen wrangler after the shot was filmed.