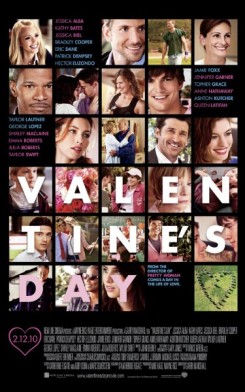 Several couples deal with relationships as Valentine’s Day draws near. Some couples break up, others unite and they all intertwine somehow.

Throughout the film, several dogs are seen performing such mild action as sitting, standing, being held or petted, jumping off furniture, barking and walking or running on- and off-leash. For all of these scenes, trainers used hand signals and verbal commands to cue the mild action, which the trained dogs  were accustomed to performing. All grounds were inspected for hazards and sets were closed and secured. Cast and crew members were introduced to the animals and instructed on their proper handling.

For a scene in which a dog plays tug of war with a pair of boxer shorts, ultimately ripping them, the dog’s favorite toy was sewn into the shorts, and trainers cued the dog to get the toy. The actors mouthed and pantomimed the dialogue and yelling so as not to distract the dog from its playing.

As Reed (Ashton Kutcher) and Julia (Jennifer Garner) stand on a bridge, ducks swim by. Trainers made a floating device with chicken wire attached to the sides of it. One trainer released the ducks from the floating device and another trainer stood in the water and made vocal sounds to signal the ducks in the proper direction. The ducks were dried off right after filming.