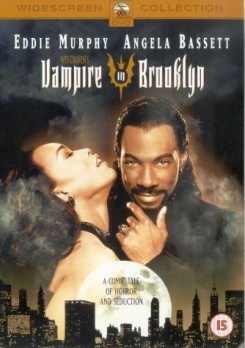 Maximillian is the only survivor from a race of vampires on a Caribbean Island, and as a vampire, he must find a mate to keep the line from ending. He knows that a child had been born to a woman who had a vampire father, and he searches for her in Brooklyn. Rita's mother, who has died in an asylum, was that woman and Rita has nightmares that she does not understand. Not knowing that she is part vampire, Max woos her and attempts to bring her to her blood sucking destiny. Even though Rita has strange dreams and actions, Justice, her partner, has feelings for her and does not want her involved with this stranger Max. But it is Rita who must decide her destiny.

In the scene where Silas encounters the wolf on the freighter, the wolf snarls from the upper deck, then leaps over Silas's head and down the deck, slowly walking around the dead bodies. As Silas turns around, all he sees is an enormous shadow of the wolf against a warehouse wall. However, before turning around again he sees the wolf snarl as he disappears into the night. This scene was filmed in cuts. In order to get the wolf to snarl at Silas as he is on the upper deck, trainer #1 was behind the wolf holding him on a line while the 2nd trainer called him to his mark. Then a 3rd trainer cues him to snarl by showing him a bone. Dummies were used to simulate dead bodies. The scene with the wolf's shadow against a warehouse and him snarling before disappearing into the night was accomplished with three trainers. Trainer #1 released the wolf with the 2nd trainer stopping the wolf on his mark. Trainer #3 then waved a towel and used voice commands to get the animal to snarl. When Rita and Justice go to see Mr. Caprisi at his restaurant they are met by Guido, an ex-employee of Caprisi's as he is being tossed out of the front door after being fired. Max appears as they go inside and he decides to use Guido as his way into the restaurant, so he morphs into Guido's body as he enters the establishment. Caprisi is sitting at a table stroking his white cat as he talks to Rita and Justice. As Max approaches, the cat senses that he is there and immediately begins to hiss in his direction. The cat becomes agitated, and as he leaps off the table at Max, Max shoots it. This scene was shot in cuts using a real cat and a fake fur and tail. When the cat hisses at Max, the trainer used hand commands along with a plush toy that the cat reacts to on a regular basis. When the cat jumped at Max from the table, the animal was merely jumping into the arms of his trainer. Fur and a fake tail were used to simulate the cat as he is being shot. When Max and Julius go to retrieve his coffin at the docks he has an encounter with a policeman and his guard dog. The guard and his dog, Killer, are walking past the crowd when the dog stops in front of Max. Max stares at the animal until he becomes quiet. Then Killer flies upward into the air leaving only his collar and leash behind. This scene was filmed in cuts. A fake dog was used for the shot of Killer flying up into the air. In the scene where Rita and Justice go to visit Dr. Zeko, at the Caribbean Bar, he greets them with a pet snake around his neck. As Rita stands at the bar there is a Cobra in an aquarium above the liquor bottles behind her. The snake frantically slams its body against the aquarium glass, breaking it. He then slithers down among the bottles, slowly winding his way towards Rita. She turns around and the cobra's head is there in front of her, hissing. Just as suddenly as she sees it, someone grabs it by the head and she turns to see Max standing there.. The scene was filmed in cuts using a real and an animatronic snake. Except for the shot of the snake exiting the aquarium the snake action was accomplished using an animatronic snake. The scene where Max kills the woman who is walking her dog in the park was accomplished with a trainer off camera merely calling the dog, as the actor let go of the leash. In one scene a cockroach is seen walking across a desk. Julius scoops it up and eats it. This scene was shot in cuts. A real cockroach, which was placed on the desk and later retrieved by his handler, was used when the roach walks across the desk. A fake cockroach was used when Julius is seen eating the roach.