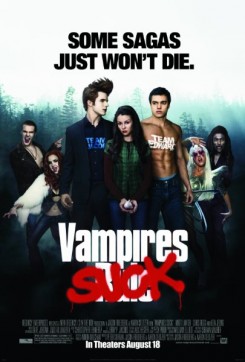 Becca (Jenn Proske) is torn between two different boys as prom gets closer in this spoof on vampire movies.

Cat Action A cat runs across a lawn and Jacob (Chris Riggi) chases it. A trainer released the cat from a crate and it ran to another trainer who was calling to it. The grounds were checked ahead of time for hazards. Later in the film, Jacob is seen running after another cat, which was entirely computer-generated. Squirrel Action Edward (Matt Lanter) runs to a squirrel, picks it up in his mouth and spits it out on the ground. Suddenly the squirrel comes back to life as a vampire. The beginning of this scene was filmed with a live squirrel. A trainer placed the squirrel on its mark and stood just off-camera, using a bait stick to get the squirrel to look in various directions. A puppet squirrel was used for the remainder of the scene, along with some computer-generated imagery. Dog Action A couple walks a dog on a leash. The dog wears a sweater, which it was accustomed to wearing and comfortable in. The couple was instructed on the handling of the dog before filming began and the grounds were checked ahead of time. The trainer handed the leashed dog to the actor and stood just off-camera. Jacob jumps up in the air as a human, and lands on the ground as a Chihuahua. The dog then runs over to a dead body and begins to eat it, grabbing a finger. The trainer dropped the well-rehearsed dog from a very low height to the ground. The trainer verbally cued the dog to walk over to the foam prop body, which had dog treats hidden in it. The finger and the blood were made from gelatin colored with food coloring.