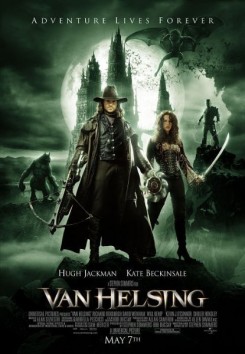 For the first time since the 1940s, Universal Studios’ classic villains – Dracula, the Frankenstein monster and the Wolf Man – return to the silver screen to delight a new generation of fans. Set in the late 19th century, "Van Helsing" finds Bram Stoker's legendary monster hunter dispatched to the shadowy land of Transylvania on a quest to vanquish the evil, seductive and thus far, undefeatable, vampire Count Dracula (Roxburgh). By his side is the lovely Anna Valerious (Beckinsale), one of the last members of a royal family line that has been systematically annihilated by Dracula. United against a common foe, Van Helsing and Anna set out to destroy the vampire and rid the world of his empire of terror.

En route to Transylvania, Van Helsing and his trusty companion Friar Carl ride atop a snowy mountain. Though they appear to travel next to the edge of a cliff, the horses actually walked beside a three foot embankment and post production editors super-imposed a cliff and CGI snow over the action.

During the opening scene in Anna’s village, one of Dracula’s bloodthirsty brides snatches a cow off the ground and hurls it through the roof of a house. The cow later reappears, mooing on the second floor balcony. Production purchased this cow – named Naceska – and trained him to lead, stand, and tolerate the noises and activity of a movie set. But rest  assured, movie magic and CGI are responsible for the bovine’s spontaneous flight.

Despite its dilapidated appearance, the house was actually a sturdy construction with extra beams added to support the second floor and balcony. Crew members built a ramp made of thick, reinforced plywood inside the house for the cow to walk up to the second story, and the balcony area had high railings to prevent the cow from falling out. Once on mark, Naceska munched some hay while the trainer stood off camera holding the cow by a lead.

Anna and Van Helsing infiltrate Castle Frankenstein to locate her brother Velkan (Will Kemp) and see rats scurrying around on a table. After smearing it with ground cat food to bait the rodents, trainers placed eight rats on the table and stepped out of frame. The rats walked around in the background during the actors’ dialog.

No real bats were used in this production. On action, a props person would run toward the camera waving a cardboard bat mounted on a pole. Later in the studio, the production added CGI/digital effects to bring the action to life and multiply the bat.

During the most complex animal action scene in the film, Van Helsing drives a six horse team and carriage to transport Frankenstein to Rome, where he can hide out from Dracula. In the middle of the journey, Dracula’s brides materialize and pluck Van Helsing from the driver’s seat. He manages to free himself and lands on the moving horses, jumping from steed to steed until he’s back behind the reins. The horses leap through the air over a broken bridge, causing the carriage to separate and plummet into the gaping crevasse.

The horses escape, dragging the sparking trace behind them when another coach suddenly races out of the forest and joins up with Van Helsing’s team of horses. A werewolf jumps on the carriage and it bursts into flames while the horses continue to run. As the fight with the Wolf Man ensues, Van Helsing falls but manages to cling to the bottom of Anna’s carriage and eventually get back up.

Although it looks like Van Helsing drives the coach, it was actually controlled by Hungary’s champion carriage driver, Laszlo Juhasz, who has years of experience driving a 6-up team. This process is known as having a “blind driver”. The real driver is hidden inside the coach but has full view and control of the horse team by means of an opening located below the driver’s seat through which the lines run. The actor held a set of lines connected to the horses’ harnesses –not the bridles – and had no control over the team.

As viewers can easily surmise, this sequence –indeed, the entire film – contains loads of movie magic. The actor never actually jumped from horse to horse to get back to driving the team; small white stickers were placed on each animal so that editors would know where to add the digital images of Van Helsing in post production. The treacherous jump over the broken bridge was filmed separately in front of a green screen, and to simulate the movement, the horses jumped over a small ditch without the coach attached.

Special effects technicians used propane “flame rods” on top of the coach and controlled the fire level from inside the carriage. The horses were not attached to the carriage when it exploded into flames, and allother fire was added in digitally. Images of the horses running off with a flaming metal piece dragging behind them were also CGI. Van Helsing’s perilous fall into the rear wheel of the carriage was filmed using specialty designed wheels, an expert stuntman, and CGI. The horses were never in danger of a possible wreck that one might assume would accompany losing a carriage wheel.

This sequence required eight weeks of prep for the main horses and horsemen, and other horses were also trained in case one had to be removed from the six-up. For enhanced safety, a wrangler was assigned to each horse at the beginning and end marks of the scene, and one wrangler rode in the coach. All traces had quick release latches for the swift removal of a horse, if necessary. The lead team wore splint boots on their front legs, and all horses wore silver bell boots on their front legs to prevent injury.

Greens crew placed two loads of mulch on the road to ensure proper footing because of the snow, and all horses were shod with studs in each shoe for optimal traction. Wranglers also picked the horses’ hooves after each take to remove any snow packed inside the horseshoe and/or hoof.

Six additional wranglers stood behind trees on each side of the road along the length of the run, and only well-trained horses were used for the two 6-up teams during filming. The horses were gradually familiarized with the cameras, and the production invested considerable time practicing all of the stunts in this scene, especially the wagon wreck and two 6-ups riding side by side.

The black and silver face masks worn by the horses were made of rubber and lined with soft material. They had ample holes cut out for the eyes and mouth, and the mask was attached to the bridle with leather buckles. Because of the cold weather, the horses were blanketed and kept warm between takes.

Although much of this production’s filming took place in the Czech Republic and therefore did not fall under the American Humane Association’s direct purview, director Stephen Sommers specifically requested our presence to monitor the animal action in this film. American Humane greatly appreciates conscientious