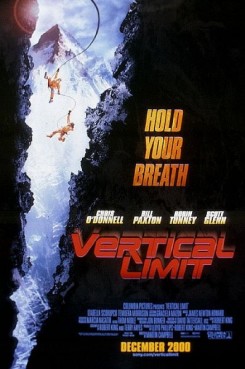 After his father’s tragic death in a climbing accident, Peter gives up the exhilaration and danger of mountaineering. But he is soon pulled back in—to rescue his sister and her summit team who are trapped in a crevasse on K-2, the world’s second highest mountain.

During an uncharacteristically placid moment in this action film, Peter films two Snow Leopards playing in the snow. Three Snow Leopards—two brothers, Yetti and Jetta, and a female, Kayla--were transported from their home at the Center for Endangered Cats in Minnesota to the filming location in Browning, Montana. They rode in an oversized, heated trailer with separate quarters for each cat, and  were accompanied by four trainers and a veterinarian. The scene features Yetti and Jetta, who were released onto the snow and then did what came naturally--they romped and played with each other as the trainers watched close-by. The two Snow Leopards continued to frolic in the winter wonderland long after the director called “Cut.”

Snow Leopards are critically endangered—there may be less than 1000 left in the wild, their destruction attributed to a loss of habitat, disappearance of natural prey, and the fur trade. The Snow Leopards in Vertical Limit were born and raised in captivity in the United States at the Center for Endangered Cats, which houses two of the rarest breeds of cats in the world: the Snow Leopard and the Amur Leopard, of which less than 30 exist in the wild.

The high mountains of central Asia serve as the natural home of the magnificent Snow Leopards, who deftly climb the snowy slopes with large paws that act as snow shoes. Smaller than the common leopard, their body length ranges from 3 to 4 feet long, and they weigh between 65 and 100 pounds. They have a rather long tail—between 30-35 inches long—which helps to protect their body from the cold and also acts as a balancing device. Their life span in captivity averages from 17 to 19 years.