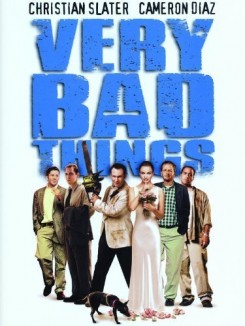 Very Bad Things is a film about a bachelor party gone bad when the entertainment, a stripper, is accidentally killed.

There is a dog in several scenes, sitting and riding in a van or car, sitting on a coach, digging in the dirt, and barking. The trainer placed the dog on its mark and cued it with verbal and hand commands. In a scene toward the end of the film, the dog is riding in a car and there is an accident. The dog is later in a backyard walking around on three legs. The scenes were shot in cuts. The dog was placed in the car by his trainer for the establishing shot and removed before the accident shot. When the dog is in the backyard, the original dog was replaced by a canine stunt double with three legs.