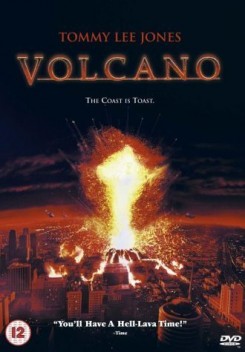 Volcano is a film about the eruption of a volcano under the La Brea Tar Pits in downtown Los Angeles. It becomes a race between man and nature in order to stem the tide of lava that threatens to engulf the entire city.

Roark the officer in charge at O.E.M.C.C.(Office Of Emergency Management Control Center) has a golden-retriever seen in several scenes throughout the film. The dog is seen sitting on the couch, walking A to B following actors and also eating eggs off of a plate that had fallen on the floor. During a small earthquake, he is seen standing in the kitchen. Another dog is seen in a house that is starting to burn. The dog's owner is outside pleading with him to come out through his doggy door. The dog is seen running from one room to another, picking up his bone and then making a dash through his doggy door to safety. Other animal action consists of some animals seen at the triage center set up outside the hospital. A snake, a dog, a parrot and a pot belly pig are seen on gunnies as the orderlies attend to their well being. There is also a parrot seen sitting on a perch.