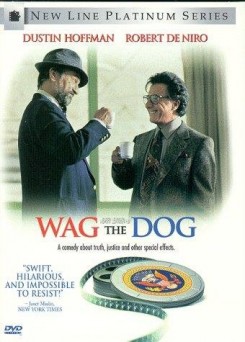 Wag the Dog is a political satire about the behind-the-scenes manipulation of a political campaign. When the incumbent President is implicated in a sex scandal involving a minor, a high-powered public relations expert is brought in to conduct damage control. He, in turn, enlists the services of a Hollywood producer who helps orchestrate an elaborate diversion in the press, which includes a phony war and a phony war hero.

As part of the elaborate cover-up, a foreign war is created in the process. This includes manufactured journalistic film footage of a young girl fleeing a burning town while clutching her pet cat. Cages of animals are seen in the background at the sound stage so that the producer can cast the animal he deems appropriate for the footage. Actors hold a dog and several cats in an audition line up. It is made clear that the animal finally chosen and seen in the edited footage is computer generated.

The president's opponent is also running a series of television ads. In one of these, two jockeys are seen discussing the campaign. In the background there is a horse standing in one of the stables.

A dog is later seen following the casket of the phony war hero who has lost his life in the fictitious war. The dog follows in the procession as the casket is carried from an airplane into a hangar. Several horsemen in uniform are later seen in a funeral cortege.

American Humane Association was present on set to monitor the animal action. We are rating Wag the Dog "Acceptable".