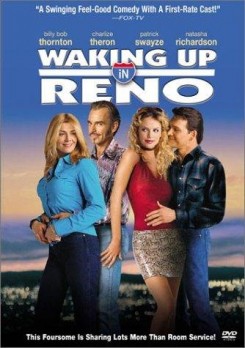 Waking Up in Reno

It’s viva Las Vegas time when two trailer-dwelling couples (one is Billy Bob Thornton and Natasha Richardson, the other is Patrick Swayze and Charlize Theron) decide to take a road trip to see a monster truck show. Only time will tell if their friendship and marriages survive this Jerry Springer-inspired vacation.

The Film and TV Unit of the American Humane Association (AHA) monitored the action sequences involving animals. The AHA has sole authority, through a contract between Producers and the Screen Actors Guild, to protect animals used in film and television. Safety Representatives reviewed the script  and action scenes before and during filming to ensure that animals were not harmed or mistreated and that AHA Guidelines for the Safe Use of Animals in Filmed Media were upheld. They also monitor conditions in which animals were housed during production.

Darlene (Natasha Richardson) opens a sliding glass door where a little Pomeranian dog is standing, whining to go out. The dog then runs out into the backyard where the children are playing. Two trainers and a veterinarian accompanied the dog onto the set. One trainer released the dog inside the house and when the door was opened, the other trainer, who was out in the yard, called the dog over.

In a brief scene, two black dogs run in a yard as the camera pans across the landscape. One trainer released the dogs, which happened to be familiar with each other. They ran across the grass to an awaiting trainer, who offered them both an edible treat.

Darlene grabs husband Lonnie Earl’s (Billy Bob Thornton) wallet and drops it into a large aquarium at a casino in Las Vegas. He sticks his hand into the aquarium and retrieves his wallet. The fish in the aquarium were plastic.