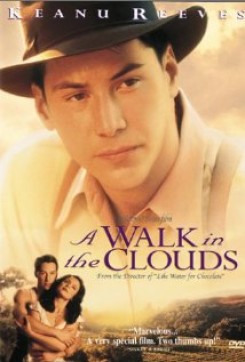 Walk In The Clouds, A

The year is 1945, World War II is over and the G.I.'s are coming home. In San Francisco, Paul Sutton has just gotten off the ship and waits for his wife, Betty, to pick him up, but she never shows. Paul takes a cab home and surprises her. Betty is delighted to see him but she did not know he was coming home. Paul questioned her as he had written to her every day and told her the exact date and time he was to arrive. Betty admitted she hadn't read most of his letters, because she didn't want to hear about all the violence of the war. When she received a letter, according to her, it was enough just to know that he was still alive. Betty also informed Paul that she spoke with his former boss and he has kept Paul's job open for him. She even talked the boss into a raise for Paul, as long as he wears his uniform to work. The problem is that Paul doesn't want his old job, selling chocolates, back. If Betty had just read his letters, she would have known that.

The next morning, Paul awakens, puts his uniform back on, takes his luggage that had not been unpacked, and leaves for Sacramento on the train. On the train, Paul meets a young woman who is crying. She falls into Paul's arms and promptly vomits all over him. Paul washes as much of it out as he can in the restroom but when people walk the other way because of the odor, Paul changes out of his uniform into his civilian suit. Paul and the young lady happened to disembark at the same station where they both get on the same bus. When two young punks start hitting on her, Paul jumps to her defense, and a fight breaks out. All three of them are thrown off the bus. The two punks walk one way, and Paul walks the other way, once again running into the young lady who sits on her bag crying.

Her name is Victoria Aragon, daughter of the Aragon family, who owns the successful vineyards of the same name just down the road. Victoria has been crying because she's afraid her father will kill her when he finds out she left school because she was having an affair with one of her professors and became pregnant. The affair is over and Victoria is still a single young woman. Since Paul is there with her, they decide that he will come home with her and pretend to be her husband. They also agree that Paul can go on his way the following day on the pretense that he is out working to provide for Victoria and the baby.

As they head down the road to the family vineyards, we see a beautiful home set in a little valley with a spectacular view of the vineyards. The clouds seem to hover nearby, giving the house an almost mysterious, but breathtaking effect. Once inside, Victoria introduces her family to Paul as her "husband." Alberto, her father, is enraged. Every time he asks Paul a question, Paul's answers are not what he wants to hear, so Alberto gets more enraged. He asks Paul about his family. Paul has no family as he was raised in an orphanage. Alberto asks Paul what he does for a living. Paul sells chocolates and offers everyone a sample. When Pedro, Victoria's grandfather, asks for a sample, this enrages Alberto even more. But, undoubtedly, the thing that upsets Alberto the most is that Victoria and Paul were not married in the church.

While Victoria's mother and grandmother seem willing to give Paul a chance, Pedro takes an interest in Paul and advises him how to get the rest of the family on his side. The next day, as Paul and Victoria planned, Paul starts to sneak out of the house before anyone is awake. However, Grandfather Pedro is there to greet him. He asks for some more of Paul's candies, which he enjoys testing. Pedro also knows that if he eats all of Paul's candy, there will be none left for Paul to sell. Paul takes a walk with Pedro who shows him the root of the Aragon life — the very first vine ever grown on the land. Pedro tells Paul that he will be an orphan no more. In the meantime, he also tells Paul of the harvesting of the grapes which is about to take place and feels Paul, as the new member of his family, should rightfully be there to assist. Paul decides to stay and even though he knows nothing about the harvest, Paul joins in and enjoys being a part of this family.

In the meantime, it is apparent that Paul and Victoria are falling in love. As much as Paul admits to Victoria that he wants her, he is not a free man and does not want to hurt her. The day comes when Paul must leave. Victoria is upset and yells at him to go back to his wife. She will tell her father the truth, taking all of the blame.

When Paul arrives home, he finds Betty in bed with another man. She tells Paul their marriage wouldn't have worked anyway and asks Paul not to be hurt as she hands him annulment papers. Reassuring Betty he will not be hurt, he promptly signs the papers, keeping a copy for himself, and leaves for the Aragon vineyards and the love of his life, Victoria.

Animal Action is minimal. In one scene, there is a horse in the background and ducks are seen in a small pond on the estate. During harvest time, two horses pull a wagon with a small load of the grapes. The Aragon Family also arrive on horseback at the Harvest Festival. Later, we see a small flock of sheep near the courtyard walking A to B, and in another scene a groomer brushes a horse.