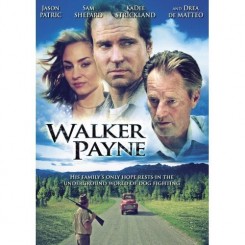 Set against a backdrop of rural America in the late 1950s, Walker Payne examines one man’s desperate attempt to hold on to his children at any cost. Unemployed and recently paroled, the only bright spots in Walker’s (Jason Patric) life are his two girls and loyal pit bull, “Brute.” When circumstances lead this flawed hero to exploit his canine companion for money, Walker risks losing everything he cares about for a chance at having the life for which he longs.

This film met the Guidelines established by American Humane, received the Monitored-Acceptable rating, and was awarded the "No Animals Were Harmed”® End Credit Disclaimer.

A pit bull mix named “Fonzie” played the hero dog Brute in most scenes, though a handful of understudies were also available and used as needed. In a scene at the bank, Brute jumps on Thompson’s (Carl McIntyre) desk and he shoves the dog off. The actor instructed Brute to jump up on the desk and a trainer on the floor then called to him as Thompson pretended to push the dog away.

Brute enjoys a sip of Walker’s beer during one scene at a baseball game and another in a bar. Chicken or beef broth replaced the brew in both cases. While at the bar, a drunken worker pushes Brute off a barstool, prompting Walker to deck the man. As a safety precaution, trainers braced the stool with sand bags and set up rugs on the floor to cushion the dog’s landing when the trainer called him down. The actor only pretended to push Brute, and Walker “punched” him after the dog was out of frame.

Whenever Brute accompanied Walker in his truck, a trainer would load and unload the animal in the vehicle and ride on the floor of the truck to hold the dog in place. All traffic was locked off, and for some of the driving scenes, the truck was towed by an “insert car” that had a police escort.

During a training montage at the baseball field, Brute wears a chain attached to cinderblocks that he drags across the field. The trainer slowly conditioned Brute to wear a harness and pull a cinderblock attached to a chain. In shots of the dog pulling multiple cinderblocks, the first block was real and the other two were lightweight props.

Due to the controversial and intense animal action required, American Humane became involved with this production early on. A Certified Animal Safety Rep helped select the full- and mixed-breed pit bulls and American bulldogs used in the film and witnessed their training and preparation for the simulated fight sequences. Walker Payne in no way glorifies this savage “sport”, and in fact, writer/director Matt Williams says, “Dog fighting is vicious, cruel and, unfortunately, is still practiced throughout this country and many parts of the world. I intended this film to be a blatant condemnation of a barbaric sport that has been deemed a felony in all 50 states. It is the controlling metaphor of the film.”

During the initial training, dogs were first introduced to each other on leash to test compatibility for play action that would eventually appear on screen as fighting behavior. If any signs of aggression or forceful domination occurred, such dogs were separated and considered incompatible. Dogs that played easily together were allowed to play and wrestle on and off leash in a plywood pen for just a few minutes and were then separated so they would be eager to play together in the future. Behavioral training soon followed, with the dogs learning to go from one mark on the ground to another and to “speak” and back up on cue. They then advanced to more elaborate tricks, such as jumping through an open-window obstacle and onto a car hood.

During filming of the fight scenes, production adhered to a limited number of takes, and the dogs received food rewards and lots of praise afterward for responding to their trainers’ cues to bark, lunge or back up. Some lunging shots were accomplished by filming the dogs individually as their off-camera trainers waved a favorite toy just out of reach. In Brute’s last fight against the white pit bull named “Monster,” trainers positioned each dog on a lie-down on the ground and one handler physically put Brute’s mouth on Monster’s neck for a particular bite shot. There was no real biting or aggression involved.

Extras witnessing the fights silently pantomimed their cheering so as not to distract the dogs. The floor of the pit was padded, and trainers would place the “losing” dogs in a down-stay position on the pit floor to indicate one of the competitors had died. The illusion of fighting and wounded dogs was entirely created by a combination of editing cuts, sound effects and water-based, non-toxic makeup. Groomers clipped the dogs’ coats almost to the skin in some places and the canine makeup artists would fill in those patches to look like fresh wounds or old scars.

While being chased by the police after one brutal fight, Doc (Guy Boyd) tries to revive Brute in the backseat of the car and inserts an IV into his leg. For this shot, a prosthetic “breathing bladder” was placed between the blanket and the dog to simulate labored breathing. The IV was administered to a prosthetic leg—not the real animal. When the men hide out in Ohio, Brute lies on a kitchen table as he receives stitches and is hooked up to an IV. After the trainer placed Brute on a down-stay and covered him with a blanket, the actor pretended to sew him up, monitor the prop IV, and clean his non-toxic, makeup “wounds.”

So-called “sports” that involve pitting animals against animals or humans against animals continue to thrive in certain areas, whether legal or illegal. Dog fighting, cockfighting, bullfighting, and bear wrestling; coon-on-a-log and coon-in-a-hole; hunts where animals are used to pursue, capture or kill other animals; and other such events result in abuse, maiming and painful death for thousands of animals each year.

These cruel, barbaric events almost always end in the death or serious injury of an animal. Such organized and willful abuse of animals is contrary to the values of a humane, aware and caring society. American Humane condemns and opposes all such blood sports and calls for an immediate end to legal acceptance of blood sports and for strong enforcement of laws that now exist banning those brutal activities. American Humane appreciates the efforts of elected officials to create stronger and more comprehensive laws providing for the enforcement of animal fighting prohibitions.