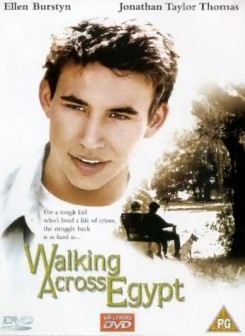 Walking Across Egypt is a story about an elderly widow named Mattie Rigsbee. With her children grown and busy chasing lives of their own, she seems to only care about going to church and planning her funeral. One day she is introduced to a stray dog and a juvenile delinquent. Mattie believes that she needs these responsibilities like she needs to go walking across Egypt. However, she discovers that fate doesn’t always share a person’s beliefs.

The movie opens as the camera follows a little dog across  fields and down country roads, until it spies Mattie working in her yard. The dog trots up to the porch and sits down. Mattie proceeds to feed the dog and although her son believes she should keep the canine for company, she calls the pound to collect the dog. Throughout the movie, the dog is seen eating or in a cage at the pound.

In another scene the animal control officer arrives in a truck that is carrying crates with several other stray dogs in them. He eventually picks up Mattie’s visitor, places him in a crate and drives off. There are several other scenes at the pound where dogs are seen in chain-link pens.

After Mattie decides to befriend the young boy in trouble, she takes him fishing. In the fishing scene the line is seen being pulled and then the actor reaches out of camera frame to lift up a fish he has apparently caught. The boy decides to throw the fish back and let it live. The fish that is seen appears to be dead or a prop, however this was not scripted action and AHA was unaware of the scene until the film was screened.