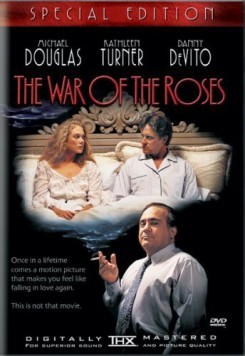 War of the Roses, The

The War of the Roses is a very black comedy that may prove too painful to watch by anyone who's ever been through a divorce. Barbara and Oliver Rose's story is told by their good friend, a high-priced attorney. They seem like an idyllic couple when they first meet and marry. We see them as struggling young parents. They're upwardly mobile and when Oliver becomes a partner in his law firm and they acquire the home of their dreams, life is perfect, on the surface that is. When Oliver suffers what he believes is a heart attack, Barbara never comes to the hospital. She later tells Oliver that she was relieved when she thought he might die and asks him for a divorce. She doesn't want alimony, she only wants the house. Oliver won't give her the house, and he also won't move out. With that the first battle in their war begins.

Barbara teases Oliver's dog Benny by feeding liver to her cat, but not to Benny. When Benny is chasing her cat, her cat runs into the driveway and Oliver accidentally runs over it. To retaliate Barbara hides Benny and makes Oliver believe that he ate Benny in the pate she served him. The dog and cat are actually good friends and play together. Much of the "chase" was filmed with one animal at a time, and you never see the car hit the cat.