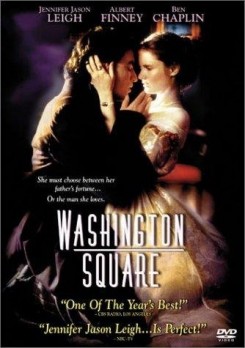 Washington Square is a film about Catherine, a young girl whose mother died while giving birth to her, and how her father and aunt raised her. Catherine was homely and when Morris, a handsome young man, courts her and asks for her hand in marriage, her father becomes suspicious. Catherine's father believes that the only reason Morris is interested in her is because of her wealth. After informing them that he will disinherit Catherine if they marry, Morris has a change of heart and leaves town. Catherine is devastated, nonetheless, she learned a valuable lesson from the ordeal. She never marries, instead, she changes her life and finds happiness within herself.

In a few scenes a parrot is seen in a cage in Catherine's bedroom and two parrots are seen in a cage sitting on a piano. Other animal action consists of a dog seen on a leash being walked from A to B and a dog sitting in a cart. There is also a scene in a bar where two dogs are seen on leashes barking at each other as if they are getting ready to fight. The trainer placed the dogs on their mark and cued them with verbal commands. Horses and carriages are also seen in the background in the city merely walking from A to B.