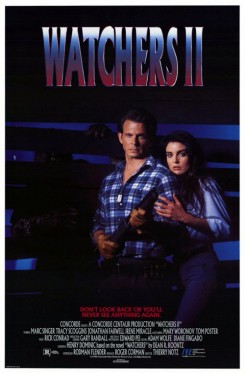 At a top secret federal facility a doctor is trying to breed super-intelligent animals to be used for military purposes. By splicing genetic material of humans and mammals, the doctor has successfully created Einstein, a dog who thinks like a human. The doctor has also created a violent and dangerous monster, The Outsider. The Outsider was created from the same human brain as Einstein, making them genetic brothers, but the Outsider is evil and hates Einstein and is intent upon killing him. When animal rights activists break into the laboratory one night to rescue animals, they release the Outsider. The monster wastes no time murdering some of the activists as he begins his bloody and violent search for Einstein.

Slaughtered sheep found on a hillside outside the laboratory were created by the same man who designed the monster. Real wool was attached to plastic molds. Animal organs purchased at a supermarket were spread around the fake sheep to create the illusion they were mauled. When Einstein climbs a ladder to escape the monster, the ladder is actually at a 60 degree angle, but is made to look steeper via camera angles. Instead of rungs, the ladder was constructed with blocks for the dog to place his paws. Spaces between rungs were blocked off so there was no danger of falling. There was a platform to the side of the ladder (out of camera range) to take the dog off the ladder. They filmed about six or seven steps at a time, with limited takes and frequent rests. The confrontation scene between the monster and Einstein was filmed in cuts using a fake dog and the real dog. When the monster violently throws Einstein, it's the fake dog that he's actually throwing.