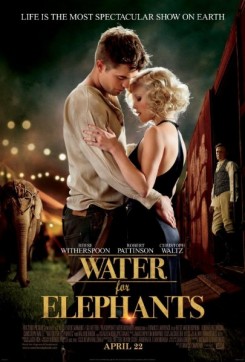 A veterinary student’s life changes after he suffers the loss of his parents and joins a traveling circus.

All grounds were inspected for hazards and sets were closed off and secured. Cast and crew members were introduced to the animals and instructed on their proper handling. Throughout the film, whenever background animals were seen, all grounds were checked, and trainers doubled as costumed actors and stood nearby. All of the costumes that the animals were wearing were custom-fit and lightweight.

Whenever Rosie the elephant is seen holding items in her trunk, rearing on her hind legs, sitting on a stool, or bowing, these were all trained behaviors. An off-screen trainer would cue Rosie to perform these tricks. All of the other animals seen in the circus were carefully placed in their cages and secured. Off-screen trainers stood by to monitor the animals. The giraffes were attached safely to a rope held by a stake. When Rosie is seen drinking anything, she is drinking colored water that was deemed safe for her consumption. The train seen on screen was custom built to accommodate the animals and actors. Platforms were made for the animals to enter and exit the train. The train was filmed in front of a green screen and never actually moved.

All horseback riders were stunt riders or experienced actors who were skilled at riding, mounting  and dismounting. All running/galloping scenes were well-choreographed, and actors used caution while on and near animals. Whenever the horses are seen rearing, this was a trained behavior. When teams of horses pulled wagons or carriages, the drivers were experienced and the horses were familiar with each other and accustomed to the pulling action.

When Marlena (Reese Witherspoon) leads Silver the horse into the circus ring, a trainer handed her the reins right before the shot took place, and off-screen trainers cued the horses to follow the actress and run around the ring. Costumed wranglers stood at the exit of the ring to collect the horses once they ran out.

When Jacob (Robert Pattinson) and Marlena are going to put Silver down, Jacob prepares to shoot her, and an off-screen trainer instructed Silver to lie on her side and remain still. The gun seen on screen was a plastic, lightweight prop. The gunshot noise was added in post-production.

The scene where Jacob feeds the lion and it tries to grab his arm was achieved by attaching a fake arm to the bucket that the actor held. The trainer had prepped the lion to grab the fake arm once it came through the cage.

Throughout the film, Kinko (Mark Povinelli) had a pet dog named Queenie, who was seen performing such mild action as sitting/standing/lying, being held or petted, and performing tricks at the circus. For all of these scenes, trainers used hand signals and verbal commands to cue the mild action, which the trained dog was accustomed to performing. The barking/growling was also a trained behavior. In the scene where Queenie entertains an audience, you see Kinko give him liquor; it was actually colored water. Queenie was instructed to get up and fall down by an off-screen trainer, to make it look as if he was impaired.

After August (Christoph Waltz) introduces the circus performers, they all begin to enter the ring. We see a team of horses pulling a wagon, and Marlena is seen riding the elephant. An off-screen trainer was responsible for safely attaching the horses seen pulling the wagon. This trainer stood in as an actor and drove the wagon into the circus ring. The elephant was also cued to walk toward the center of the ring by the off-screen trainer.

During the scene where August is seen hitting Rosie, we hear her make sounds of pain and discomfort; these were all sound effects that were added during post-production. The bullhorn that August hits Rosie with was a fake horn made of styrofoam. The horn had a green ball attached to the end of it that, through CGI (computer-generated imaging), was made to look like Rosie was being jabbed and hit. An off-screen trainer instructed Rosie to move quickly toward the back of the train car, to pull her chain, and to swing her trunk up and down to capture the look of turmoil. August never came in direct contact with Rosie. Thanks to CGI, and with the help of a makeup artist, the wounds seen on Rosie were painted on using safe, non-toxic, oil-free paint that did not stain the elephant’s skin.

The chaotic scene in which the animals are released from their cages was filmed in separate shots in front of a green screen. Animals were filmed one at a time and were never together on set. The animals were attached to lead ropes that were held by costumed trainers who stood just off camera. The scene in which a man is attacked by a bear was, in reality, a costumed trainer wrestling with the bear.

The scene in which Rosie hits August on the back of the head was filmed in two separate shots. The stake that the elephant used was a plastic prop that was lightweight. A trainer placed the plastic stake in Rosie’s trunk and cued her to swing it. August then stood in to make it appear as if he got hit in the back of the head.

In the home video scene where Marlena is feeding the lion cubs, a trainer handed her a baby bottle that she used to feed them; these trainers stood by, out of frame. The scene in which Marlena and Jacob’s baby is playing with the dog and Rosie is standing in the background, was achieved with the help of a trainer’s commands. The trainer was responsible for getting these animals to achieve the mild action seen on screen.