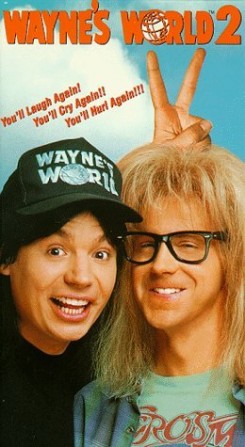 Wayne's World 2 is a follow up to Wayne's World. In this comedy, geared for teens, Wayne has a vision where Jim Morrison, the famous rock star, beckons to Wayne and informs him that he must put on a concert in his home town of Aurora. Jim also tells Wayne that he must travel to England and find Dell Preston, an equally famous musician's roadie. He further tells him he will help make the concert a success. Wayne and his best friend, Garth, set out for England and bring Dell Preston back to Aurora where they start on their adventure to put on Waynestock, which they hope will be the biggest concert ever.

Animal action is minimal. In one scene as Wayne is racing in his car to stop his girlfriend from marrying another, he smashes into a plate glass window, crashing into crates of watermelons, and crates of chickens. No chickens were actually in the crates. Only feathers are seen flying everywhere. One chicken is seen in the back of Wayne's sports car as he drives away. The chicken had been placed in the car for this short clip and filmed. In another scene, Wayne and Garth, in a dream sequence, are crossing the desert. They collapse in the sand and we see two vultures standing by them. In one background scene, a baby goat is also seen being carried by a man at a rock concert. The man carrying the goat was the goat's trainer.