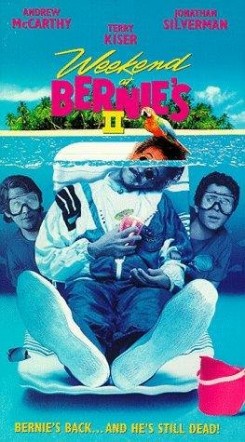 Larry and Richard use a voodoo revived corpse to track down hidden money to clear their names.

When Charles and Henry go to retrieve Bernie they are given a bag supposedly containing a chicken. The chicken starts clucking and Henry hits the bag on the wall to shut the chicken up. There was never actually a chicken in the bag. Chicken clucks were added in post production. When they are about to perform the ritual that brings Bernie back to life, it is finally time to use the chicken. Henry turns the bag over and a chicken walks out of the bag. A chicken was placed in the bag just prior to this scene and then released from the bag. Unfortunately, a man enters the room where they are performing the ceremony and the chicken escapes through the open door. They must now find a suitable substitute for the chicken, so they settle on a pigeon they find in the park. They take the pigeon and go back to where they have Bernie set up and place the pigeon in the fold of Berine's arm. This scene was shot in cuts. The actor does not actually pick up the pigeon at the park. Only a shot of the pigeon is seen walking on the grass. The pigeon's handler handed the pigeon to the actor prior to the pigeon being placed on Bernie's arm. In one scene as Bernie walks to the beat of the native music, he walks out into the water where we see a circling shark. The shark grabs onto Bernie's leg right as Bernie is hooked from above by a parasailer. Bernie is whipped out of the water, shark in tow. As he raises higher out of the water the shark is forced to drop off and back into the water. Both a real and a mechanical shark are used for this scene. In another scene Larry and Richard hook Bernie up to a wagon so he may pull them to their destination. Unfortunately, The wagon goes out of control down a hill, with Bernie flailing back and forth in front of the wagon. They come to some street vendors along the side of the road and Bernie crashes right into some parrots in cages, causing birds and feathers to fly. This scene was shot in cuts using both real and fake parrots. The real birds are only seen in a shot of them in their cages. When the actor plows into the cages, fake birds had been substituted for the real ones, with fake multi-colored feathers flying about and a fake parrot was attached to Berine's shoulder. In another scene four goats are seen standing in the middle of the road. A car drives up and honks, urging the goats to move to the side of the road. Other animal scenes included a man in a theater holding and petting a chicken, a man riding a horse, a horse pulling a passenger trolley, a goat being held on a leash and a cat meowing is heard in one other scene.