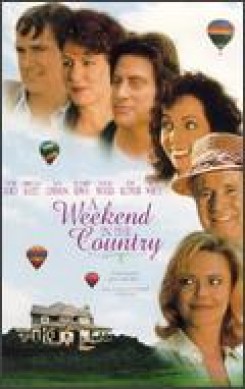 Weekend In The Country, A

A Weekend In The Country is a comedy that takes place in the wine country of Temecula, California. Bobby Stein is a fairly well-known comedian who leaves New York for a one-night job in Temecula. There he meets another New Yorker, Sally Shelton, who is unmarried and six month's pregnant.

Bobby and Sally find out they went to grammar school together which leads Bobby to invite Sally to The Balloon & Wine Festival in town. They have great fun at the festival and even ride on a couple of llamas they see at the petting zoo. There is a series of comic events and the introduction of a string of eccentric characters. Eventually Bobby and Sally bond over the birth of her baby and head back to New York together.

In an opening scene, there is a brief shot of a large bird in the sky. Cows are also seen in a pasture as atmosphere.

The fair was not staged. It was an actual fair with animals present. Sally and Bobby are seen at the fair, each mounted on a llama. The llamas seemed to only move their feet twice as they are petted by the two actors.