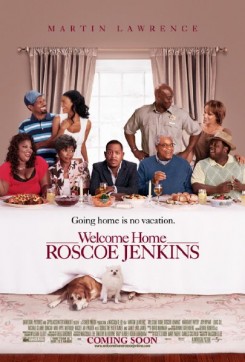 Talk show host and celebrity Roscoe Jenkins (Martin Lawrence) brings his Hollywood girlfriend to the Deep South for his family reunion. When Jenkins and his high-society girlfriend try to blend in with his down-home and opinionated family, they encounter wacky situations and relationship woes.

Whenever a dog is seen performing mild action, such as walking on a leash, lying down, rolling in the grass or being held by an actor, off-camera trainers used hand signals and verbal cues to get the dog to perform the action. The actors were introduced to the dogs and instructed on their proper handling before filming. All dog costumes were custom-made and comfortable. Anytime a dog is seen eating, the food was deemed safe for dog consumption, and the salad Fiona (played by Quigley) ate was baited with baby food so she would lick the lettuce. Any dog bark or whine was achieved either by trainers’ cues or by sound effects. Ted (Bucky) and Quigley (Fiona) were introduced to each other and were familiar with each other.

Whenever Fiona is seen sitting in a car, trainers equipped her with a monofilament safety line, placed her on her mark on the car seat and cued her to stay. One trainer then hid inside the car and gave the dog treats and baby food while another trainer stood outside the car. The car moved slowly and only a short distance.

When  Fiona reacts to Roscoe’s (Martin Lawrence) cousin stomping his feet near her or reacts to Roscoe getting into bed with Bianca (Joy Bryant), trainers cued the dog to bark or growl and rewarded her with treats afterward. When Fiona is seen on the top bunk during the actors’ argument, trainers placed Quigley on the bunk, cued her to stay, and stood nearby as a precaution. Trainers carried her off the bed between takes.

Fiona is balanced on a box on a yoga mat, with her feet off the floor. Moments later, she is lying on her back on the mat. For this, trainers gently placed the well-rehearsed dog in the various yoga positions and then used verbal commands to cue her to stay or move her legs in certain ways. The dog was rewarded with treats afterward.

Bucky is lying on his back and Fiona is on top of him, in a seemingly intimate moment. This scene was filmed in separate shots. Trainers placed Ted on his back and cued him to stay. They then placed Quigley over Ted and cued her to stay. Quigley was then replaced by a stuffed prop dog, which was attached to Ted’s body with an elastic band. The trainer held Ted’s hind legs and moved him back and forth under the camera to simulate intercourse. To show Fiona close up from Bucky’s point of view, a trainer lay on the grass and held Quigley up and over his chest, manually bouncing the dog up and down. Trainers cued the dogs to howl.

Amidst a food fight, Fiona appears to get doused in a flour mixture. For this, food (such as flour, cornmeal and Egg Beaters) was tossed in Quigley’s direction. The food was checked beforehand to ensure it would not harm the dog, and the off-camera crew members who threw the food were instructed to toss only a small amount. Camera angles made it look like the dog had more food thrown at her than she did. Later in this scene, when the actress picks food out of the dog’s fur, trainers placed Quigley on a towel on the bed next to the actress. Cornmeal batter and cabbage pieces were placed on the dog right before filming and washed off immediately afterward.

When Bucky lies on the grass cuddling with Fiona, trainers placed Ted in a “down-stay” posture and positioned Quigley between Ted’s paws. Trainers wiped a small amount of baby food on Quigley’s face and cued Ted to lick it and put his head on her.

Bucky is asleep on a bed with his arm around Fiona, spooning her. Trainers placed Ted on his mark on the bed and cued him to stay, then placed Quigley in a “down-stay” position under Ted’s arm. When an actor entered the room, trainers used a squeaky toy to get the dogs to look in the actor’s direction. For the part of the scene in which Bucky stands in the hallway while Fiona appears to be tossed out of the bedroom, one trainer cued Ted to walk out of the bedroom and another trainer lightly tossed Quigley a few inches from one side of the bedroom door to the other. The dogs were well-rehearsed and were rewarded with treats and praise.

A skunk’s tail brushes Roscoe’s face and then sprays him. For this, a skunk was placed on its mark near the actor’s head and was given velvet cake with grub worms inside of it. Trainers used verbal cues and grubs to get the skunk to stay on its mark, and they removed the skunk immediately after filming. The spraying portion of this scene was created using a stuffed prop skunk and special effects.

The mosquito on Roscoe’s nose was a fake prop.

Due to late notification or limited resources, American Humane did not monitor some of the dog action or any of the snake action.