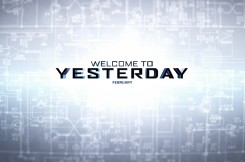 A group of teens construct a time machine.

In the scenes which include the dog, the dog’s mild action includes sitting/lying, being petted, and running off leash. For all of these scenes, trainers used hand signals and verbal commands to cue the mild action, which the trained dog was accustomed to performing. The barking/growling was also a trained behavior.

In the scene where the dog is sitting in the car, trainers took him out of the car between takes and provided him with food and water.