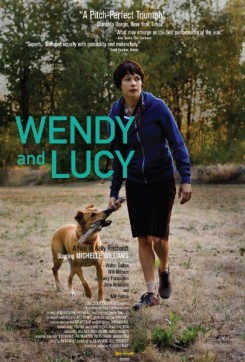 A woman's life is derailed en route to a potentially lucrative summer job. When her car breaks down, and her dog is taken to the pound, the thin fabric of her financial situation comes apart, and she is led through a series of increasingly dire economic decisions.

Although Wendy and Lucy is carrying the “No Animals Were Harmed” language at the end of the film, American Humane’s Film & Television Unit did not issue an official disclaimer for this film. This film is carrying an unauthorized end credit and has been contacted to remove this language from  the film.

American Humane did not monitor the animal action and was not given a pre-release screening of the film.

Wendy’s dog Lucy is seen in several scenes throughout the film. The dog performs such mild action as walking/lying down, drinking water, being petted, and playing fetch. American Humane did not monitor any of the animal action in the film.