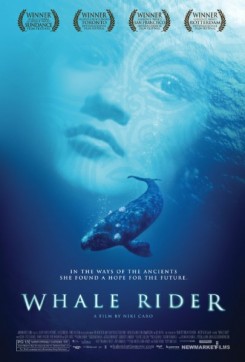 This adaptation of Witi Ihimaera’s 1986 novel “The Whale Rider” combines a lyrical tale of Maori mysticism with one community’s struggle to uphold its traditional ways. Set in coastal New Zealand, the film tackles the creation myth of the Ngati Kanohi tribe, which believes that its leaders descend from the legendary figure Paikea – the Whale Rider. According to a thousand-year-old custom, the chief’s eldest son automatically inherits tribal leadership, but tragedy intervenes and that line is broken when son Porourangi renounces his destiny for an artistic career elsewhere. Instead we follow the story of 11-year-old Pai, Chief Koro’s spirited and scrappy granddaughter who repeatedly demonstrates the courage and dignity of a natural  spiritual leader. Patriarchal pigheadedness blinds Koro to Pai’s innate gift, however, and he sets out to find a suitable boy from within the tribe to succeed him as chief.

To find the new community leader, Koro creates a school where he educates a ragtag group of local boys in both the “old ways” and the qualities of a chief. Through exhausting teachings of ancient chants, tribal tradition, and warrior techniques, Koro tries fruitlessly to find a suitable successor and becomes enraged when he catches Pai practicing these ancestral customs—traditionally reserved for males—on the sly.

The film comes to an emotional climax when a massive herd of whales becomes stranded on the beach and the entire village struggles unsuccessfully to return the animals to the ocean. Pai’s karmic gift is finally revealed as she coaxes the whales back into the water in a display of sheer spiritual power, and her true calling as tribal leader becomes evident, even to intractable Koro.

Director Niki Caro describes the whales that appear in that final scene as not so much animatronic as humantronic in that they had people inside. She went on to explain that “the whales were modeled out of either latex or fiberglass, and the scenes involving the whales were augmented by computer graphics.” In fact, all of the underwater whale footage was digital.

The film was a New Zealand production and was not monitored by American Humane.