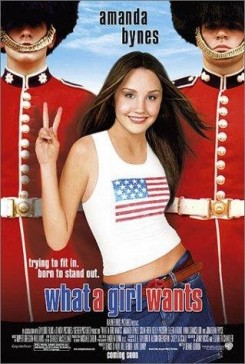 What a Girl Wants

Daphne, a free-spirited teenager played by Amanda Bynes, goes to England to get acquainted with her father (Colin Firth), whom she has never met. He turns out to be a prominent political figure. Daphne tries her best to fit in without losing her own self-identity.

A cute and loveable Yorkshire Terrier named Pickles played the part of Mrs. Charlotte’s dog. Pickles is eight years old and was rescued from a shelter. Although Pickles has appeared in some commercials in the UK, this was the dog’s movie debut. The dog was introduced to the actors before filming began, was quick to make friends with its costars and all were very comfortable with each other by the time the cameras rolled.

The trainer coached the actress playing Mrs. Charlotte on how to handle the dog. Pickles became comfortable in the arms of the actress as she sat or walked around. In one scene, Daphne takes the dog from Mrs. Charlotte who is seated at a table. She sets the dog down on the floor and uses hand signals to get the dog to roll over a few times. Only Daphne’s hands are shown when the hand signal was given to the dog because they are actually the hands of the trainer. This was movie slight of hand that enabled the trainer to give the cues, retain the dog’s focus, and get the best performance.

When Mrs. Charlotte attends the Queen’s Ball, she holds the dog as she converses, but the dog appears to be struggling to jump out  of her arms. The actress finally places the dog on the ground and it runs directly to Daphne and sits down in front of her. For this scene, the actress held the dog in her arms as a trainer stood just off camera, using hand signals to get the dog to snarl. The squirming was accomplished by having the actress hold the dog securely as the trainer called to the dog, making it want to be released and run to the trainer. The actress then lowered the dog to the ground and the trainer used visual cues to get the dog to walk over to Daphne and sit down. Both actresses always kept a supply of dog treats in their pockets to reward Pickles after each scene.

A man sits in a wheelchair and ambitiously shoots at the discs that are released, but he seems to hit everything around him but his target! He hits the top of a birdhouse and as wood and feathers fly, so do a few birds. Then we see a cat climbing on a tree branch until another inaccurate bullet hits it and splits it, sending the cat leaping to safety.

To safely accomplish the illusion of chaos, the birdhouse was specially designed out of lightweight balsa wood. A separate compartment was made inside the top of the birdhouse that held an air compressor, balsa chips and feathers from a down pillow, so that the destruction could be cued and controlled. The gun that the actor used was a prop and the sounds were added in post-production. To add the effect of the live birds being displaced, one trainer was hidden behind the birdhouse. On cue and in rapid succession, the actor aimed the fake gun at the birdhouse, the air compressor was turned on, the roof of the birdhouse blew off, feathers and balsa chips flew, and the trainer released five pigeons, one at a time. The winged actors flew to another trainer off camera who held a cage packed with bird treats. All of the birds were homing pigeons and were banded in case any decided to take flight, although all of the birds were content to fly to the food.

For the cat stunt, a real tree branch was engineered around platforms that enabled the cat to jump down safely. A trainer placed the cat on the tree branch and used hand signals to get the cat to look and walk around. On the trainer’s cue, the cat jumped off the branch and onto the platform below. The cat was retrieved and rewarded with a treat. As in the birdhouse stunt, an air compressor was used to make it appear as if a bullet hit the branch and split it apart. By the time they filmed this however, the cat was in its cozy crate enjoying some food and water. Later in post-production, all the pieces were edited together.

At the end of the film, the blissful couple is seated on top of a camel. The man who holds the rope attached to the camel is actually the trainer, who tried to get the camel to walk, but was unsuccessful. The trainer helped the couple to mount the camel and then took the rope and began to walk. The camel preferred to just stay where he was…and he did.