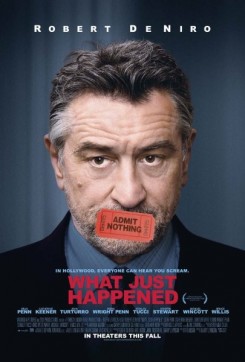 Based on true tales of bitter Hollywood moguls, powerful film producer Ben (Robert De Niro) has to deal with ruthless studio executives and stubborn actors in order to get his next big picture deal approved, all while finishing the editing stages of his most recent film, which is heading for disaster.

In the film that Ben (Robert De Niro) is editing and market-testing, Sean Penn’s character has an American bulldog. The dog gets out of a car and walks with Sean as the car pulls away. A trainer hid on the floor in the back seat of the stationary car, released the dog and cued it to exit the car. The dog was then cued to “go with” the actor while the well-rehearsed driver drove in the opposite direction. The actor had been instructed on the dog’s proper handling and had given the dog treats moments before filming to entice the dog to follow him.

The dog stares at a gunman right before  he appears to shoot the dog in the head. A trainer made eye contact with the dog and cued him to stay. The trainer stood on a ladder to give the dog the eye line of the gunman.

During the film premiere at Cannes, the dog from the Sean Penn film hangs out on the red carpet. Before filming, a costumed trainer placed the leashed dog on its mark and stood by it, allowing it time to familiarize itself with the actors milling about on the red carpet. Once the dog was accustomed to the people, the costumed trainer held the dog’s leash and walked around near the other actors. The trainer stayed right next to the leashed dog while reporters and photographers interviewed and took pictures of the dog. The dog was on a leash and with a trainer during the entire scene.

The birds flying in the sky during the gravel factory scenes just happened to enter the scene and were filmed in their natural habitat.