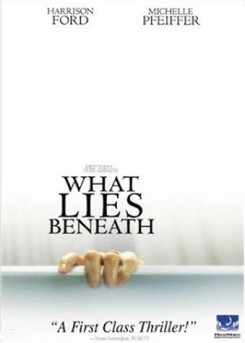 In this thriller, Claire begins to have contact with a ghost who visits her in a new house she has just purchased with her husband. It seems this ghost of a young woman is trying to tell her something. Claire's husband thinks she is having a breakdown and tries to convince her the ghost isn't real.

Dog Action A dog named Cooper played the family pet in this film. The dog was shown in several scenes throughout the film. The trainer stood off camera and would verbally cue the dog to sit, stay and follow the actors. In one scene, Claire and Cooper are on the pier and she throws the ball in the water for Cooper but he just stands and stares at the ball. The trainer put the dog on its mark and verbally cued it to stay. The dog happily obeyed and was rewarded with it's favorite treat after the scene. Cat Action Mrs. Frank walks into the living room to find a cat curled up on the chair. She picks up the cat, sits down in the chair and strokes the cat as she holds it in her lap. The trainer put the cat on the chair andstood off camera as the scene was being filmed. The cat was retrieved by the trainer afterwards. Rat Action A scene that takes place in a laboratory shows a scientist put some liquid on a cotton ball, pick up a rat and hold the cotton to the rat's nose. He then sets the rat down. The trainer put the rat cage on its mark on the counter. The liquid that was put on the cotton ball was colored water. The actor picked up the rat and held the cotton ball briefly up to the rat and then set it back down into it's cage.