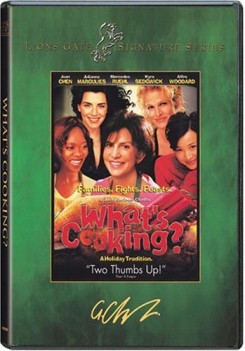 In this comedy we watch a few families prepare for big Thanksgiving celebrations. Some secrets come out around the dinner table at each celebration that startle some of the family members at first, but prove to bring the families closer together in the long run.

There were two  different dogs in this film. There is a Dachshund, played by Max and a Boxer mix, played by Caz. Each dog had it’s own trainer on the set with it at all times. The dogs were familiarized to the actors before filming began so that they would be comfortable with them. The trainers placed the dogs on their marks and stand off camera as the scenes were being filmed. Most of the animal action consisted of the dogs standing or lying in the background. When the actors are shown carrying the Dachshund, the trainer placed the dog in the actors’ arms and retrieved the dog afterwards.