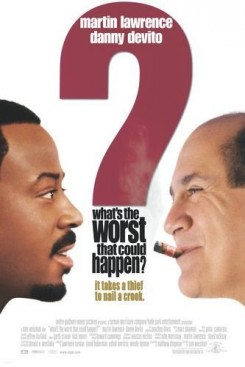 What's the Worst That Could Happen

Max (Danny DeVito) is a privileged billionaire who catches a thief, Kevin (Martin Lawrence), robbing his mansion. To get even with him, Max takes the thief's lucky ring, telling the cops that it's his own ring. Deprived of his good luck charm, and faced with a future of bad luck, Kevin begins wreaking revenge on the tycoon. The story becomes a battle of wills as the thief tries to get his most treasured possession, his luck, back from a man who has everything.

Parks, Pets and Ponds: As the camera pans around a park, we see a man walking a dog on a leash, people walking by and others feeding ducks in a pond. All of the action that appeared in this scene was natural. The people were not actors and the animals were doing their every day activities: swimming, eating and people watching! One Pampered New Yorkie: Gloria, another character, has a cute little Yorkshire Terrier that appears in several different scenes. All the actors were introduced to the dog before filming began so they were all very comfortable with each other. When we first see this cute little Yorkie it is curled up in bed with Gloria who is busily talking on the phone. The dog walks to the edge of the bed and jumps down and goes to its own bed on the floor. The trainer placed the dog on its mark on the bed and then stood off camera and used visual cues to get the dog to jump off the bed and go into the dog bed. Later, the dog walks in and barks at a person who has fainted on the floor. The dog turns in circles at the feet of the detective until he bends down, picks it up and pets it. When the actor sets the dog back down on the ground, it follows him around the room as he proceeds with his interrogation. The trainer places the dog on it's mark and using visual and verbal cues gets the dog to bark, turn in circles and even follow the actor around the room.As the scene draws to a close, we see the detective bend down, pick up the dog again and pet it. As he exits, he hands the dog to Max, who appears to hand it to his wife located off camera. The trainer used a hand signal to get the dog to stay while the actor picked it up. The dog is then given to another actor who hands the dog back to the trainer who doubled for Max's wife - unseen and off camera! One Tough Granny: As an elderly woman waits for an elevator she cradles a small dog in her arms. When the doors finally open, she sees the security guard, Earl, pointing his gun right at her and her dog. When she sprays him with pepper spray, he jumps out of the elevator and she gets in holding the dog. The doors close, but when they open again, this time two cops are standing with their guns drawn. Once again she sprays them with her pepper spray as the doors close. The actor was handed the dog by the trainer who stood just off camera. The guns were from the prop department and the pepper spray was really water. Pooch Valet: Tardio, the dog walker of questionable gender, walks three dogs on leashes. One of the dogs appears to be going to the bathroom. When a little squeak is heard, Tardio explains that it is only gas! We know it was only a sound effect. All three dogs were used to working together as a team. A Bird at the Ball: Kevin stops to see the Parrot that is perched on a branch in the hotel ballroom. He begins to talk to the bird and it spreads it's wings and screeches at him. The trainer placed the bird on a fake tree branch, stood off camera and used a hand signal to get the bird to open its wings. The sound of the bird screeching was added in post production.