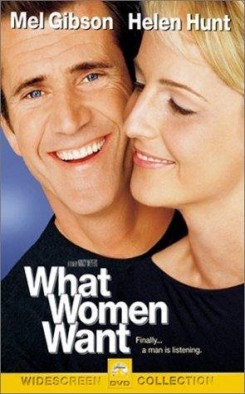 Mel Gibson takes a comedic turn as Nick Marshall, a chauvinistic Chicago ad executive. After he is electrocuted in the bathtub one night, he realizes he is able to read women’s minds. At first this scares Nick, but soon he is able to use this new power to his advantage.

In one scene, the camera pans around a room to reveal pigeons flying outside of the window. One trainer stood on one side of the window with fifteen pigeons inside a cage. Another  trainer stood on the opposite side, approximately twenty-five feet away, next to an empty cage scattered with birdseed. The first trainer released the birds, which flew to the other trainer and into the cage to the tempting treats.

A kitty also makes an appearance in the film. The spunky feline rubs Nick’s feet and then climbs up onto a door. The trainer released the cat and used verbal cues and edible treats to achieve the animal action. Later, the cat contentedly lies on the bed as an actress sits next to it and talks to Nick. The trainer placed the cat on its mark and stood nearby as the scene was being shot.

At one point, a Poodle on a leash jumps up onto its owner as Nick passes by and reads the dog’s mind. The trainer handed the actress the leash and then verbally cued the dog to jump up. The trainer retrieved the dog afterwards and rewarded it with a treat.