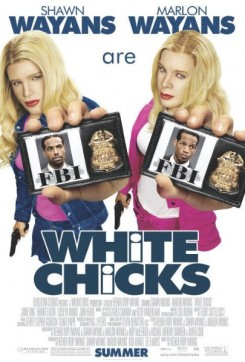 When a major drug bust in New York goes awry, FBI agents Marcus and Kevin Copeland attempt to redeem themselves by protecting hotel heiresses the Wilson sisters from a kidnapping scheme in the Hamptons. When a cosmetic tragedy strikes, sheer desperation forces the brothers to shift gears and use themselves as bait. With the real sisters hidden away, Marcus and Kevin pile on the makeup and mini skirts and manage to pass as the Wilton girls. Now, the agents must convince the Hamptons elite that they're actually young, rich, and, of course, white.

This film contains mild to moderate action involving a pampered Pomeranian and an overly protective Rottweiler.

Brittany (Maitland Ward) and Tiffany Wilson (Anne Dudek) and their fashion-conscience Pomeranian “Baby” (tucked in a Louis Vuitton Sac Chien Pet Carrier, no less) receive an FBI escort to their hotel in the Hamptons. From his personal car seat in the co-pilot position, “Baby” tries to scramble on top of the dashboard and ends up flying out the window. Kevin hangs on desperately to the dog’s leash as he jostles against the door frame. When a semi truck approaches, Kevin yanks “Baby” back inside and the car crashes with the bang of deployed airbags. The dog is next seen in the SUV’s cargo area, imbedded among the many suitcases with only his hind end showing.

This sequence  was filmed against a green screen inside a sound stage—not out on the open road as it appears. Crew members rocked the Suburban to make it look like it was moving, and fans provided a gentle wind. Charlie, the Pomeranian who played the part of “Baby”, received extensive training prior to performing the action on camera and wore a safety harness throughout the scene.

Trainer Steve Woodley placed the dog on the dashboard with part of his hind end hanging out the window. On cue, an effects person tugged a monofilament line attached to Charlie’s harness, which pulled him out of frame and into the Steve’s hands. As a precaution, ½ inch of blue foam padding covered the side of the SUV door, although the trainer’s hands were never more than a few inches away from the dog. Steve gently tossed Charlie to a second handler in the vehicle for the shot when Kevin pulls the dog back inside in the nick of time.

Finally, the canine posterior seen wedged among the suitcases was actually a stuffy. According to our Animal Safety Rep on set, Charlie was extremely bold for such a small dog and really seemed to enjoy his work.

Darnell and Marcus/Tiffany bring “Baby” along on their date and the dog tries to bite Darnell when he pets him. To achieve this behavior, Charlie had been trained to go after a squeaky beeper that an off-screen handler used to attract his attention. Inside the restaurant, “Baby” joins the awkward couple at the dinner table and sits in his very own booster chair. When Marcus/Tiffany farts, the dog covers his nose with one paw. Steve got Charlie to touch his nose with the simple command “cover.”

At the nightclub that same evening, Darnell hits the dance floor and leaves “Baby” in the care of another partygoer. Apparently under the influence of the drug “ecstasy”, the young man kisses the dog in an overly affectionate way. Thankfully, the shot is from behind the dog’s head and the audience is left to imagine the action.

Due to the camera angle used, Steve the trainer was able to stand in for the actor for part of this scene by wearing an identical shirt. Steve held up the dog with both hands and clenched Charlie’s favorite toy in his mouth, making squeaky noises to get looks from the dog. Although the audience doesn’t see the actual French kiss on the big screen, the actor playing the party boy got Charlie to reach up into his mouth for a food reward in the form of a piece of cheese. Yuck!

Meanwhile, Kevin invites Denise over to Darnell’s plush bachelor pad and pretends that it’s his own home. The would-be owner is in for a nasty surprise when “Max”, a ferocious Rottweiler, appears and looks highly displeased to see the trespassers. “Max” snarls and growls at Kevin before knocking him over and dragging the poor man to another room while Denise watches in horror.

Four male Rottweilers, aged eight to 15 months, played the role of Darnell’s dog “Max”, and quite a bit of movie magic went into the making of this scene. For one segment, an off-screen trainer held the harness of a dog named Rotti-Max while a second handler lay just under the camera with the dog’s favorite soft bone, cueing him to snarl and bark. Director Keenen Ivory Wayans wanted the shot to look fierce, and the harness allowed the dog to lean into the camera. This action was filmed for a so-called “plate” shot that would later make it look like the Rottweiler was standing on Kevin’s chest. Editors in post production digitally erased the harness and added in the actor.

To set up the shot when the dog jumps on Kevin and attacks, production applied a green screen mat to a non-skid platform with a 5’ X 3’ surface area. The trainer released Rotti-Max at five feet away from the platform, and a second trainer holding the dog’s favorite bone cued him to jump up and give snarls, barks and some drool. Again, the actor was later green-screened in.

For the dragging shots, another dog – this one actually named Max – bit down on a stuntman’s right leg and obeyed cues to pull, tug, and growl. The man then rolled from his back to his stomach, always keeping his right leg on the outside while Max hung on. This stuntman was a friend of the trainers and had prepped and played with the dogs prior to the action.

In the last part of the sequence, the Rottweiler named Dingles pulled and dragged the actor toward a doorway and partially through it. Dingles wore a padded harness with a cable attached that the trainer held in order to guide Dingle backwards and make the dog look fierce when he lunged against the cable on cue. To keep the weight to a minimum, the actor lay on a “belly dolly” and Dingles easily pulled him the six feet A to B. One of the trainers hid a toy mouse in the actor’s breast pocket to excite the dog and get him to sniff and nose around the actor.

Four trainers were on set for this scene at all times, and extensive safety protocol was in place. For example, the production covered the hallway’s marble floors with transparent latex grip so the dogs wouldn’t slip; takes were kept to an absolute minimum and the dogs were rotated for different parts of the scene; stunt pads were used for jumping sequences; and all the dogs were extremely well prepped and socialized. In fact, our rep reports indicate that the director adored these dogs and didn’t want to do anything to stress them.

All of these Rottweilers are rescue animals now under the care of trainer Tony Nichol at Creative Animal Talent. One in particular, Rotti-Max, was rescued by Tony a year ago after his previous owner took a baseball bat to his head and shattered his lower right jaw. Consequently, Rotti-Max has no teeth on that side and is used only for snarling and growling scenes. The lack of teeth causes him to slobber a lot and thus gives the desired appearance of ferocity. In reality, though, Rotti-Max is a beautiful, completely goofy dog.

With his denim and leather jackets, fur trims and rhinestone accents, “Baby” upstages the Wilson sisters’ style in almost every scene. These mini fashion masterpieces were specially-made by the wardrobe department and featured easy-access Velcro and snap closures that were comfortable and well-tolerated.