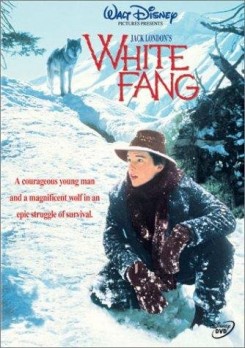 White Fang is an adventure saga based on the autobiographical classic by Jack London. Set in the Yukon Territory at the height of the gold rush it tells simultaneously the story of White Fang, an orphan wolf cub and Jack, a city-bred young man who leaves San Francisco to stake his deceased father's claim in the frozen Territory. Jack convinces Alex, a burly friend of his father's, and another man, Skunker, to take him to the remote claim and they set out by foot and sled team on their treacherous journey. Enroute they are attacked by wolves and Skunker is killed, as is a female wolf who leaves an orphaned cub to fend for himself. The young wolf, who is half dog, begins his own adventure in survival. He is adopted as a work dog by Indians who name him White Fang. When White Fang defends himself and exhibits skills as a fighter, professional dog fighters swindle White Fang away from his owner and force him to fight. These brutish men make a bundle with White Fang billed as "The Fighting Wolf" until he is matched with a Pit-bull, and is severely injured. Jack rescues White Fang and nurses him back to health and an inseparable bond is formed between the two. When Jack eventually strikes gold he must decide whether to stay in the Yukon or to return to civilization without White Fang.

This is as much White Fang's story as Jack's, and a major part of the film is devoted to animal action. White Fang is portrayed by Jed, a hybrid, who is part wolf and part dog. Both purebred and hybrid wolves are used throughout the film. In an opening sequence hungry wolves are chasing down their next meal, a rabbit. The chase was filmed separately and the wolves and rabbit were never together. When the wolves bared their teeth they were responding to their trainer's command, "Teeth". When they make their strike it's not actually seen and the wolves are shown eating a combination of dog food and chicken. Trained purebred wolves were used in this sequence. When White Fang's mother goes fishing to feed her cub, a rubber fish is pulled out of the river. The half fish that she brings back to her cub was a fake with dog food on top. Later when a wolf takes a fish in his mouth from the lake, it is a rubber fish that the wolf had been taught to catch. Part of the cargo accompanying Jack and Alex on the dog sled is a coffin containing a corpse clutching a white dog. Both were fake. In the wolf attack scene, when White Fang's mother is shot, the wolf had been taught to fall, limp and crawl as if she were injured. To simulate two wolves attacking Alex, the trainer wore Alex's jacket and the wolves grabbed and pulled at a strap attached to the jacket, which they had been trained to do. They were rewarded with food for their efforts. After his mother's death, White Fang tries to join with other wolves, but in his pursuit slides down a snowy hill and falls through a hole in a cave. Rather than actually sliding down a hill, the wolf was taught to slide on a plastic runner. As he fell into the hole he was actually dropped into his trainer's hands. When he fell onto the cave floor he fell only one foot onto soft fake snow. Camera angles made it appear that he fell further. The hungry cub tries fishing and catching mice. Real fish swimming in shallow water were never touched by the cub and were not harmed. While real mice were used, when White Fang chased mice, they were fakes being pulled on strings. When a hungry White Fang is attracted to a dead rabbit in a trap, it is a fake rabbit. When White Fang is snared by this trap and is hanging upside down, you just see his head and forefeet because he is being held up by his trainer. This sequence was shot in cuts so that the wolf could be filmed just a few seconds at a time. When a trapper cuts him down and holds him by his neck, his rear is being held and supported off-camera. White Fang's yelps while on a sled were dubbed in later. In one of White Fangs first encounters with Jack, he saves Jack from a bear attack. With a bear in pursuit, Jack seeks cover in a wood pile. White Fang confronts the bear, distracts him, and chases him off. This was shot primarily in cuts with the trainer a photo double for Jack and the bear was merely playing with his trainer. Although the wolf and bear are accustomed to each other, when they were briefly filmed together, there were wires (unseen by the camera) separating them. All the fight scenes were filmed with the animals playing not fighting. Many hours of filming the animals at play were edited down to a few minutes. Anything that looked like a real fight was edited in and sounds were dubbed in later. The animals had their own make-up trailer where "blood" and "scars" were applied. For White Fang's last fight he wore a fur collar and it is the collar that the Pit-bull had between his teeth, not White Fang's neck. When the Pit-bull is pried off with a crow-bar, the crow-bar is made of rubber and the actor is feigning the effort. White Fang is near death so Jed was taught to lie still. To this day the wolf, Jed, and the St. Bernard are good friends and play together each morning on the trainer's compound. As the brutish men try to turn White Fang into a viscous fighter, they taunt him with sticks and White Fang eventually grabs the stick and it splinters in two. A soft balsa wood stick was used and White Fang was actually growling and lunging in response to his special bone which his trainer was holding off-camera. This was the same technique used throughout the film whenever growling and lunging was required. After Jack rescues White Fang, White Fang still distrusts men and bites Jack. A fake hand was used for this. When White Fang jumps through a closed cabin window to be with Jack, he is jumping through harmless candy glass. When the villains attacked and set fire to the cabin, it was a controlled fire and was never really near the wolf. The rocks that the villains threw were made of rubber. At the request of Disney, our representative, Edward L. Lish, went to Alaska to inspect the extensive housing compound being constructed for the animals. He was on location in Alaska for 4 1/2 months and taped 22 hours of animal action in the making of the film. The production company went to great effort and expense to insure the safety of the animals. The trainer, Clint Rowe, achieved extraordinary performances from his animals through his care and concern for the total well-being of each animal. Their mutual trust and affection was obvious to all during production.